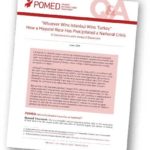 President Recep Tayyip Erdogan has marked the anniversary of a failed coup against him every passing year — this week was the third — with a national holiday that has turned the traumatic event into a celebration of Turkish nationalism, The New York Times reports (HT:FDD):

If there is an underlying message in the deal, it may be about Mr. Erdogan’s deep-seated suspicion that Washington was behind the attempt to overthrow him on the bloody night in 2016, when more than 200 Turks were killed, including one of Mr. Erdogan’s closest friends,

As the U.S.-Turkey crisis over Erdoğan’s purchase of a Russian missile system continues, the U.S. cannot ignore Turkey’s ongoing repression of civil society, Howard Eissenstat writes for the Project on Middle East Democracy. Some 16 civil society activists, philanthropists, architects, and actors face absurd charges of trying to overthrow the government in the Gezi Park protests six years ago, he notes in Civil Society on Trial in Turkey.

This unjust prosecution is only one part of the mass repression that President Erdoğan has unleashed since a failed coup on July 15, 2016, argues Eissenstat, an associate professor of Middle East History at St. Lawrence University:

It is up to Congress to condemn the unjust Gezi prosecution, the detention of Osman Kavala, and the wider repression. As Turkey and the United States attempt to work through deep divides on Cyprus, Syria, and Russian missiles, with the Gezi trial set to resume tomorrow, Congress should make clear that civil society, due process, and basic freedoms in Turkey are important to the bilateral relationship and will not be forgotten.