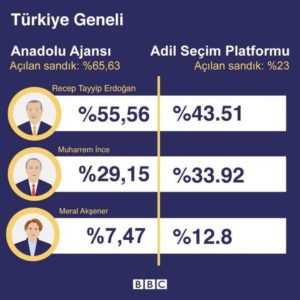 With his victory in Sunday’s elections, President Recep Tayyip Erdogan has taken his place among the world’s emerging class of strongman rulers, nailing down the sweeping powers he has insisted he needs to address Turkey’s numerous challenges, at home and abroad. Now, all he needs to do is deliver, Carlotta Gall writes for the New York Times:

Erdogan still maintains the strong backing of the newly prosperous Islamists who were long marginalized under the secular republic founded by Mustafa Kemal Ataturk; people who, like Mr. Erdogan, as the historian Soner Cagaptay has written, were “born on the wrong side of the tracks.”

The transfer of power and wealth to those newcomers over the past 15 years represents a transfer of capital that is permanently changing Turkey, said Bekir Agirdir, director of the polling firm Konda. “The government subsidizes them and they come up and become so successful,” Mr. Agirdir said of the newcomers. “It is social and political engineering.”

The election outcome prompted analysts to ask “Is Turkey still a democracy?” 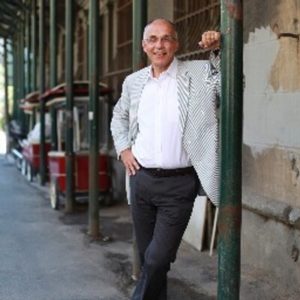 The results “could not have been better for Erdogan,” according to analyst Henry Barkey (right).

“All we know is that these were very unfair elections; we may find out later that they were also fraudulent. Time will tell,” he tweeted. “In the end CHP was not ready institutionally except that its candidate managed to galvanized people.”

Erdogan’s consolidation of power should be cause for concern in every liberal democracy, argues Yascha Mounk, a contributor to the National Endowment for Democracy‘s Journal of Democracy. The Turkish case shows that authoritarian populists can, in the long run, prove surprisingly effective in delegitimizing anybody who disagrees with them, he writes for Slate:

It shows that, even if about half of the country deeply hates them, populists can stay in power by mobilizing a fervent base. And it also shows that political and intellectual elites, both inside the country and around the world, persistently underestimate the threat that these kinds of leaders pose to the survival of democratic institutions.

The result will turn Turkey into an ersatz democracy, observers suggest.

“In this new system, the Parliament is only there to make it look like a

democracy,” said Ibrahim Dogus, director of Centre for Turkey Studies in London. “Most of the powers are now with the president, with Erdogan. It’s a bespoke system designed to suit Erdogan’s personal aspirations.”

“This is a new era in Turkey where a very powerful individual, accused of being more and more authoritarian, has extended his powers, and it could end up in a very difficult and unpredictable future,” he said.

But the Turkish opposition’s ability, after a decade-and-a-half, to join forces and reverse polarization, however, is a win that cannot be stolen, notes Aykan Erdemir, a former member of the Turkish parliament and a senior fellow at the Foundation for Defense of Democracies. Turkey finally seems to have discovered a return path, albeit long and arduous, to deliberative democracy and pluralism.

There are two competing narratives that partisans on both sides believe in fiercely. They respond ferociously to any effort to question their particular truth even if there are good reasons to do so. The unfortunate result is more anger, greater polarization, further instability, and a deepening of authoritarianism. This is Turkey’s present, but it is the wave of the future.

For years, experts have debated whether Erdogan is a comparable figure to founding father Mustafa Kemal Atatürk in terms of his significance and impact on modern Turkey, Haaretz adds:

According to Cagaptay – who last year published a biography called “The New Sultan: Erdogan and the Crisis of Modern Turkey” – while Erdogan and Atatürk “are not comparable from the point of view of their ideologies, they are very close in terms of their methods. They both pursue their cultural revolution with Jacobin policies, top-down social engineering and a focus on education.”

Just as Ataturk shaped the country in his image, Erdogan has worked to shape it in his own. Now, with the powers he has long coveted secured, Turks can expect Islam to occupy an ever greater position in public life, reports suggest.

Amanda Sloat, an Obama administration official who is a senior fellow at the Brookings Institution, said that “one of the country’s biggest challenges for the foreseeable future remains the deep polarization of Turkish society“. Erdogan’s reliance on the Nationalist Movement Party for its majority “means foreign policy will likely remain influenced by nationalist considerations”.

But the hard-fought election showed that Turkish democracy was resilient.

“The opposition parties ran surprisingly strong, energetic and competitive campaigns,” Sloat said. “Parliament will be diverse, with the coalition system ensuring the representation of a wide range of parties – including the Kurds.”

The pro-Kurdish HDP party passed the 10 per cent threshold required for parliamentary representation, notes Andrew Finkel, a former Reagan-Fascell fellow at the National Endowment for Democracy.

Erdogan won re-election on June 24, while his Justice and Development Party (AKP) achieved considerable gains in the country’s parliament to secure a majority coalition with nationalist allies, Reuters reports:

Muharrem Ince, the leader of the Republican People’s Party (CHP), Turkey’s chief opposition party, conceded but labeled the elections “unjust.” The Organization for Security and Cooperation in Europe (OSCE), a leading electoral watchdog, released a statement on June 25 criticizing the government’s inability to create “conditions for contestants to compete on an equal basis” … OSCE, however, also lauded the election’s turnout rate of 87 percent.