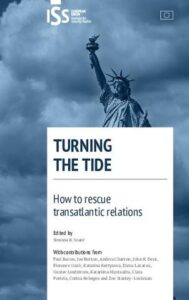 Is the United States about to give up its aspirations for global leadership and abandon any notion of moral purpose on the international stage? asks Eliot A. Cohen, Dean of the School of Advanced International Studies at Johns Hopkins University. We may be about to see “an American version of a political virus that has afflicted numerous democratic states in recent years,” he writes in Foreign Affairs.

The 2020 US presidential election is a fateful moment in every sense of the word, not just for American democracy but also for transatlanticism and the future of the West, argues former German foreign minister Joschka Fischer.

The global geopolitical landscape will be directly affected by what happens in the transatlantic relationship. The rest of the twenty-first century could be a time of dueling superpowers and deepening instability, or it could give rise to a balance of powers, with Europe making its weight felt within a broader geopolitical triangle, he writes for Project Syndicate.

China will be the central strategic issue confronting the transatlantic West. Will Sino-Western relations be characterized by confrontation and “decoupling,” trade and cooperation, or some complicated mix of both? Fischer asks:

Questions about Hong Kong and China’s treatment of minorities such as the Uighurs inevitably will drag Western values into the mix. And where Taiwan is concerned, there is good reason to fear that the new superpower rivalry will escalate to the point of military confrontation, given that China’s actions in Hong Kong have invalidated the old formula (“one country, two systems”) for maintaining peace and stability across the Taiwan Strait.

Russia and China are assiduously seeking to contribute to the disintegration of the Euro-Atlantic democracies from within, notes Corina Rebegea, the Director of the Democratic Resilience Program at the Center for European Policy Analysis (CEPA) in Washington D.C. and a Penn Kemble Fellow at the National Endowment for Democracy (NED).

Misalignment inside the democratic camp – on values, respect for democratic institutions, foreign policy (most recently on Iran, 5G or troop deployments) and even coronavirus responses – has become a major challenge to the long-term resilience of the transatlantic partnership. It has put the political relevance of alliances to the test, particularly the strength and coherence of the transatlantic community, she writes in Turning the Tide: How to rescue transatlantic relations, a new book from the EU Institute for Security Studies.

“Euro-Atlantic democracies have a wide array of diplomatic and legal tools to build resilience,”  Rebegea contends. “Using multilateral formats and diplomacy to advance good governance is a good start, but precise policies that require transatlantic coherence on money laundering or anticorruption measures, combating disinformation and ensuring digital safety will expand the basis for joint action.”

The next president of the United States should support a new trans-Atlantic bargain consisting of four elements, argues Constanze Stelzenmüller, Senior Fellow in the Brookings Center on the United States and Europe.

1. A regional division of labor within the alliance, with the bulk of the burden for Europe’s security shifting to Europeans over time — while maintaining the U.S. nuclear deterrent in Europe;

2. A trans-Atlantic trade agreement between the U.S. and the EU (but open to the United Kingdom) that abolishes all tariffs and other trade barriers;

3. A joint U.S.-EU effort on protecting global public goods; and

4. An American-European working group on reinforcing domestic resilience — including by strengthening democracy.

Russia and China are assiduously seeking to contribute to the disintegration of the Euro-Atlantic democracies from within, notes @cepa analyst @CorinaRebegea, a @NEDemocracy Penn Kemble Fellow https://t.co/SDrKdatJuX