A series of elections across Africa threaten to roll back democracy on the continent and destabilize some of the few economies around the world still projected to grow this year. The votes could reinforce a pattern of African incumbents’ working to cement their power by overhauling constitutions and passing laws aimed at silencing dissent, The Wall Street Journal reports.

“Democratic trends have reversed and there are now fewer democracies in Africa than 20 years ago,” said Christopher Fomunyoh, a Cameroonian academic with the Washington-based National Democratic Institute, in a September submission to the U.S. Congress Foreign Affairs Committee. “Many countries in Africa are falling short in their efforts to consolidate constitutional rule, in respect of presidential term limits…laws on elections, civic space and political party activity.” 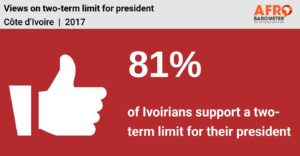 On Saturday, Oct. 31, voters in Ivory Coast vote to elect a president for the next five years. Alassane Ouattara is aiming to win a contentious third term following the death of his designated successor, Prime Minister Amadou Gon Coulibaly.

There has been a worrying uptick in violent crackdowns on demonstrations by security forces and particularly aggressive attacks by unidentified individuals, a spokesman for the human rights office, Ravina Shamdasani, told VOA.

“These unidentified individuals are known as microbes who have carried out these assaults, threats, intimidating protesters wielding machetes and knives. There are allegations that the modus operandi of these microbes, as they are called, are known to the state authorities,” Shamdasani said.

Disrupted or contested elections across Africa could roll back democratic gains, as a number of long-time leaders seek to cement power and silence dissent https://t.co/KK2FvYTS60 via @WSJ

Adding to the tensions, two of Mr. Ouattara’s most potent challengers—Guillaume Soro, a former rebel leader and speaker of parliament, and former President Laurent Gbagbo, recently acquitted of crimes against humanity by the International Criminal Court—have been barred from the Oct. 31 poll, The WSJ adds. Their supporters have decried the decision to disqualify the pair, who each enjoy large followings. The remaining opposition candidates are threatening a boycott and have urged their supporters to engage in “civil disobedience.”

Ivorian civil society has always been under-represented in public debate, analyst Florence Richard reports from Abidjan. This is even truer today as a major election nears, she writes for The Africa Report:

In the words of the sociologist Rodrigue Koné: “If you look at the main organisations, you’ll notice that all of them were created during tense periods of the country’s history. The Ivorian Human Rights League [LIDHO] was formed in 1990; the Ivorian Human Rights Movement [MIDH] in 2000; and Action for the Protection of Human Rights [APDH] in 2004. These groups were offshoots of political strategies and became instruments of political discourse. Since they don’t make much of an effort to set themselves apart from one another and be visible during crisis-free periods, they’ve lost their credibility.”

In August 2020, the State Department released the second report on the U.S. government’s atrocity prevention efforts as required by Section 5 of the Elie Wiesel Genocide and Atrocities Prevention Act (P.L. 115-441), the Tom Lantos Human Rights Commission adds. A forthcoming briefing will provide an overview of the atrocity prevention and early warning framework utilized by the U.S. government and will discuss the August report in detail.

Please join the Tom Lantos Human Rights Commission and the Senate Human Rights Caucus for an online briefing to examine developments in a critical early-warning country, Côte d’Ivoire, which has a history of election-related violence.