Blogging platform Tumblr has deleted 84 accounts it says Russian propagandists used to spread disinformation during the 2016 US election, the BBC reports:

The accounts are believed to have been used by Russia’s Internet Research Agency (IRA) – an organisation linked to many different web-based campaigns. Tumblr said it had uncovered the fake accounts while helping an official investigation into the IRA’s influence.

Britain and Russia have been waging a fast and furious information war since former Russian spy Sergei Skripal and his daughter were found poisoned March 4 in the provincial English town of Salisbury, VOA adds.

Not a day has gone by without at least one fierce exchange between British and Russian officials — and both governments have turned to social media, from Twitter to Facebook, to make accusations and counter-claims in their efforts to convince a global audience of guilt or innocence.

“Russia feels free to say whatever it wants, it doesn’t feel need to tell truth, be consistent, or stick to any norms or rules,” says a communications strategist, who has worked for the British government. “These are handicaps in a battle like this,” he tells VOA. Britain doesn’t have the same centralized, aggressive messaging machinery the Kremlin has, he notes.

Russian Twitter trolls have been attempting to show that the British public do not believe Vladimir Putin is behind the poisoning of Skripal, it has been claimed, the Daily Telegraph adds:

The potentially fake accounts, which experts say could be linked to the bot factory in St Petersburg, retweeted a poll by a British user which ended with more than 15,700 votes…. However, an analysis by the Atlantic Council’s Digital Forensic Research Lab (left), showed that some of the most influential retweets originated from pro-Kremlin accounts which seemed to be organised.

Ben Nimmo, a senior research fellow at the lab, concluded that the retweets of the poll appeared to be an “attempt by pro-Russian users to influence the online poll, and thus to create the appearance of greater hostility towards the UK government than UK users themselves showed.”

Much of this invective appears organic, driven by angry users who are convinced that their cause is right; such storms are a regrettable part of everyday life online. Some incidents, however, appear to involve organized activity, including possibly fake accounts masquerading as English users, in the well-known pattern of the “troll factory” in St. Petersburg, DFRLab adds.

The Russians and Chinese, who have tried to seal their own informational infrastructure off from outside interference, have realized the potential for asymmetrical information warfare by unleashing armies of trolls, the FT’s John Thornhill observes:

At the Financial Times’ Future of News conference in New York this week, Campbell Brown, Facebook’s head of news partnerships, predicted even worse developments. “The technology is getting so sophisticated that there is going to be video probably by the 2020 election where you are not going to be able to tell if this is a real politician speaking or a fake politician speaking,” she said. “All of us have a responsibility to recognize this is the world we are entering.”

The Kremlin’s disinformation on the Skripal case is an example in miniature of the kinds of efforts that will be repeated again and again, and it’s instructive, says Anne Applebaum, a board member of the National Endowment for Democracy.

Social media, which makes it easy for anonymous trolls to have influence, makes it easy to invent disinformation. Social divisions, which diminish trust in authorities like the British foreign office, help it spread, she writes for the Washington Post:

What is needed now is a broader version of Britain’s “expose the methodology” campaign, one ambitious enough to reach below the surface. That will take time and effort. But unless we get started, we’re doomed to live in a world where truth is defined by those who have the least respect for it. 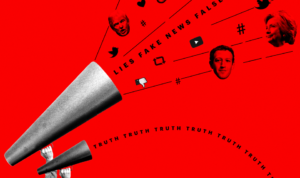 Paul Lendvai’s “fair-minded” new book “is a reminder that the lobbyists’ claims about Victor Orban’s democratic credentials and his goodwill toward the United States are fake news,” notes Charles Gati, a senior research professor of European and Eurasian Studies at the Johns Hopkins School of Advanced International Studies and the author of “Failed Illusions: Moscow, Washington, Budapest and the 1956 Hungarian Revolt.”.