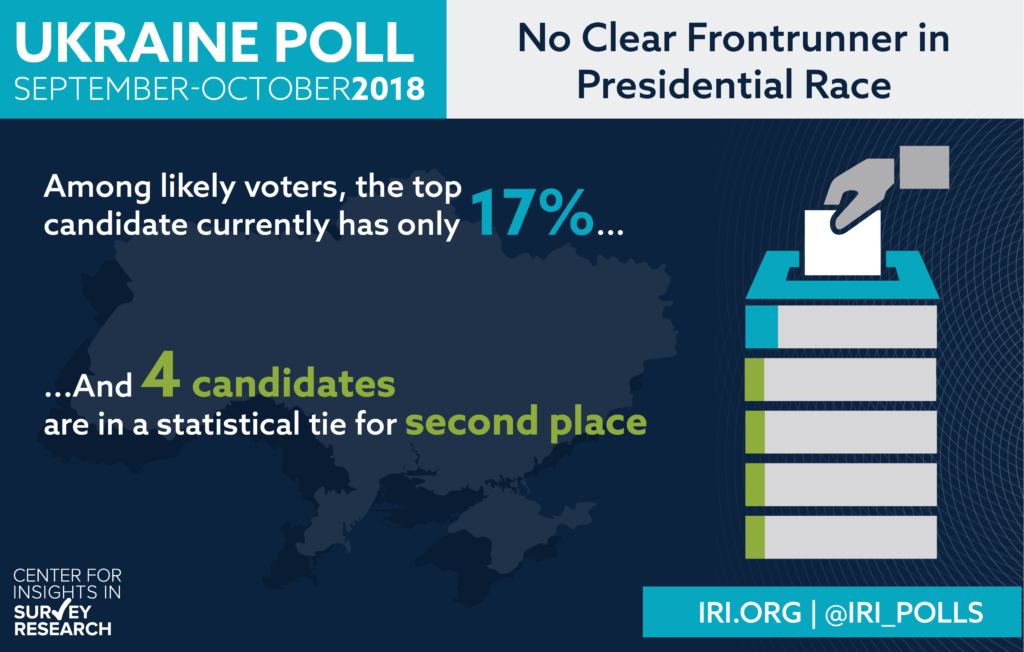 Ukraine’s March 2019 presidential race is “wide-open,” according to a new poll of Ukrainians by the International Republican Institute’s (IRI) Center for Insights in Survey Research. The survey reveals growing support for the establishment of the Autocephalous Orthodox Ukrainian Church, and considerable interest in emigration, IRI adds:

Yulia Tymoshenko leads the field of presidential candidates with 17 percent of likely voters. President Poroshenko, political outsider Volodymyr Zelenskyi and two other candidates are in a statistical tie for second place… The survey also indicates that Ukrainians increasingly favor the establishment of the Autocephalous Orthodox Ukrainian Church independent from the Moscow Patriarchate, with support rising from 39 percent in June 2018 to 47 percent.

Disinformation remains a concern to Ukrainians: just under half of Ukrainians believe their community is more vulnerable to disinformation as a result of the war in Donbas. Respondents named fact checking (37 percent) and education (32 percent) among the most effective methods to combat disinformation, as opposed to pursuing more heavy-handed measures such as banning media organizations (27 percent) or social media sites (21 percent).

“The absence of a clear frontrunner in the presidential election suggests that voters have not decided which candidate will respond to the issues that are most important to them, such as improving the economy, resolving the war in the Donbas and tackling corruption,” said IRI Regional Director for Eurasia Stephen Nix.

“Debate over the status of the Ukrainian Church reflects the wider political situation, and many view the move toward an independent Ukrainian church as a sign that Ukraine is continuing to distance itself from Russia,” he said. RTWT

The majority of both men and women in Ukraine strive to see changes in traditional gender roles, according to the results of the first national survey on the equality of men and women, carried out by the National Democratic Institute (NDI) in Ukraine, commissioned by the office of Deputy Prime Minister for European and Euro-Atlantic Integration Ivanna Klympush-Tsintsadze: