As authoritarian regimes in Cuba, Nicaragua, and Venezuela generate sociopolitical turmoil, economic disruption, and human rights abuses, only a concerted international effort by liberal democracies will establish a “hemisphere of freedom,” a Washington forum heard today.

But the incoming president of Mexico, Andres Manuel Lopez Obrador and the party he leads may withdraw from the U.S.-backed Lima Group of South American countries trying to restore democracy in Venezuela, The Los Angeles Times reports.

A new Nicaragua sanctions executive order (EO) is strategically scoped to expand the previous US sanctions actions taken in December and June under the Global Magnitsky authority, notes Samantha Sultoon, a visiting senior fellow with the Atlantic Council’s Global Business and Economics Program and the Scowcroft Center for Strategy and Security: 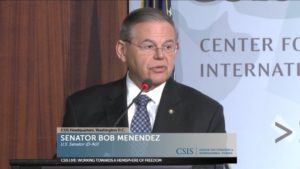 The new EO targets those involved in serious human rights abuse, corruption, and undermining democracy and stability in Nicaragua. Notably, it provides authority for the United States to apply sanctions against any government official who has served since Ortega returned to power in 2007. This significant broadening of the duration for sanctions investigations puts all current and former members of the Ortega administration on notice, adds Sultoon, a former sanctions policy expert for the Department of the Treasury’s Office of Foreign Assets Control (OFAC).

But democracy’s supporters shouldn’t yet despair, as many of the region’s presidential contests reaffirmed its resilience, she adds. In Paraguay and Costa Rica, a new generation of leaders arose to revive the ruling parties. In Chile and Colombia, where voters threw out unpopular incumbents, new presidents Sebastian Pinera and Ivan Duque are far from political outsiders.

Cuba, Nicaragua, and Venezuela are three of the four least “free” countries in Latin America and the Caribbean according to Freedom House’s “Freedom in the World 2018.”

“The United States cannot ignore violence in our hemisphere,” Senator Robert Menendez (above) told the CSIS event on “Working Towards a Hemisphere of Freedom: Connecting Democratic Leaders in Cuba, Nicaragua, and Venezuela”? “It is time to restore US leadership in democracy in the Americas and beyond,” he added. 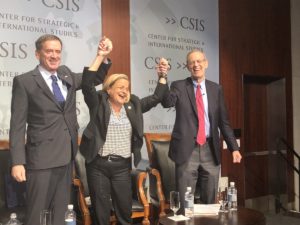 How much longer does the region have to wait for a consensus of Latin American democracies and for the first time in a long time to be part of the Cuban people and not dictators? Cuban dissident Rosa Maria Paya asked.

“As the Venezuelan crisis metastasizes, an international consensus is beginning to form around one key issue: Venezuela is not just a dictatorship, but is also involved and complicit in criminal activity, including narco-trafficking,” she added.

A strategic relationship between international community and domestic actors is essential, NED said Miriam Kornblith, NED’s Latin America Director, advocating the creative use of instruments such as Magnitsky targeted sanctions.

The CSIS event recognized Congresswoman Ileana Ros-Lehtinen’s efforts to advance freedom in the Western Hemisphere. She joined National Endowment for Democracy President Carl Gershman and USAID’s MarkGreen (above) to discuss strategies for supporting democracy and securing a ‘hemisphere of freedom.’

“The National Endowment for Democracy has been quite literally a lifeline for those in need and oppressed,” said USAID’s Green.

“Flowers of democracy and freedom are sprouting” in the hemisphere because of the NED’s work, said Ros Lehtinen.