The engagement of Ukrainian civilians in the current fight against Russia’s invasion of their country can serve as an example of democratic resilience for Taiwan, Damon Wilson (above), president and CEO of the National Endowment for Democracy (NED), said in a CNA interview in Taipei.

“The lessons that I think Taiwan can draw are precisely what we’ve seen in Ukraine — that Ukraine has had an activated population, a mobilized civil society,” he said, when asked about the similar threat that Taiwan is facing, also from a major world power. 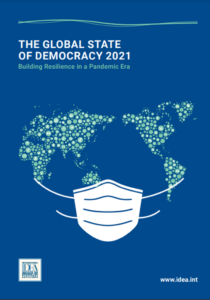 The new millennium started optimistically as a “century of democracy” as many erstwhile authoritarian and hybrid regimes became democracies, according to a recent report from the International Institute for Democracy and Electoral Assistance (International IDEA). The will of the people as the only legitimate form of authority seemed to be a popular and rapidly spreading ideal, until the Covid-19 pandemic exacerbated a trend of increasing authoritarianism, with many countries sliding back down the democratic scale, it adds.

The first of two Summits for Democracy set out a global affirmative agenda for democratic renewal and provide a space for countries to make both individual and collective commitments to strengthen and protect democracy, the Global Democracy Coalition observes. Countries were asked to submit written commitments on strengthening democracy at home and abroad. By mid-March 2022, 55 countries had made their written commitments available on the United States State Department website.

A forthcoming webinar discussion will aim to:

1) provide an overview of the commitments made, identifying focus areas, domestic versus international commitments, clusters of countries that have made similar commitments, their level of specificity and type of commitments both overall and on specific focus areas (open government and LGBTQI rights);

2) identification of commitments gaps and alignment against democratic performance indicators;

3) identify possible next steps in commitment refinement, monitoring and implementation.