Belarus is experiencing a de facto occupation by Russia but the country’s people are supporting the Ukrainians in their war with Moscow, according to Belarusian opposition leader Sviatlana Tsikhanouskaya.

“Should Ukraine fall, there will be no future but slavery inside the Russian empire for Belarus, there will be no peaceful future for Europe either,” she told the Kalinowski Forum (above) at the Lithuanian parliament.

“Cyber partisans have blocked Russian transports by hacking railway systems. Citizens, often mere teenagers, report the positions and moves of Russian troops in Belarus,” Tsikhanouskaya added. “Our real heroes, Belarusian railway workers, just two days ago completely disrupted the railway connection between Belarus and Ukraine so that trains with Russian equipment couldn’t be transferred to Ukraine,” noting that people are taking action despite the threat of jail.

A parliamentary network “United for Ukraine” is being created in Vilnius, and such a coalition is a vital asset in helping Ukraine fight the Russian occupiers, Ruslan Stefanchuk, chairman of Ukraine’s Verkhovna Rada, told the forum.

“Let’s work together to ensure that European countries and businesses have nothing to do with Russia as an aggressor country, and let’s put an end to all business transactions, including gas and oil imports from Russia. This oil and this gas have, for several weeks now, had the smell of the blood of innocent Ukrainian children killed by the occupiers,” he said.

Kalinowski’s spirit of resistance is alive today in Ukraine and Belarus, National Endowment for Democracy (NED) President and CEO Damon Wilson told the event. Only with freedom can a people be truly sovereign.

Dictatorships can last long, but not forever. Dictators eventually fail because they end up defending their fake belief in their own immortality, Marko Mihkelson, chairman of the Estonian Parliament’s Foreign Affairs Committee tweeted.

While the regime in Belarus is Kremlin-aligned, many ordinary citizens are siding with Ukraine and even taking up arms, AFP reports. 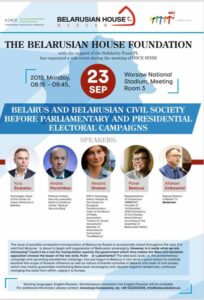 “Belarusians cannot help Ukraine with weapons, as the whole world is doing, but they cannot stand aside, so they are going to fight for the brotherly country’s independence,” the Belarusian House Foundation in Warsaw said on Facebook. The NGO, which works for human rights and democracy in Belarus, has been handling the logistics of sending volunteer Belarusian fighters to Ukraine.

“This is a battle between democracy and freedom on one side and dictatorship on the other,” said 24-year-old Belarusian Pavel Kukhta, head of a new volunteer center.

The United States “will continue to put pressure on the tyrant in Minsk, we will continue to call for the release of all political prisoners, and we will continue to demand and document and build cases against those who torture citizens in Belarus,” said Michael Carpenter, a former national security adviser to US President Joe Biden and now US Ambassador to the Organization for Security and Co-operation in Europe.

The forum was held to honor Vincent Kanstancin Kalinoŭski (aka Wincenty Konstanty Kalinowski in Polish and Konstantinas Kalinauskas in Lithuanian),  one of the leaders of the Lithuanian, Polish and Belarusian national revival. The discussion focused on three main issues: a) support for the independence of Belarussians; b) how the parliamentary diplomacy can contribute to the future of democratic Belarus; c) Lukashenko’s tactics and strategies, that are now being implemented by Russia’s dictator.