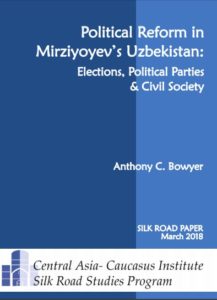 Even some of Uzbekistan’s harshest critics insist that the country’s new leader, President Shavkat Mirziyoyev, is serious about bucking a drift toward authoritarian rule around the world — a trend evident in Cambodia, the Philippines, Russia, Turkey and even in once-proudly democratic nations such as Hungary and Poland, the New York Times reports:

Uzbekistan’s neighbors in Central Asia, all authoritarian with the exception of Kyrgyzstan, the smallest country in the region, show no sign of loosening up. Kazakhstan, ruled by the same leader since independence in 1991, still allows no real opposition, while Tajikistan and Turkmenistan have grown more repressive….

Since taking over from long-time President Islam Karimov in 2016, Mirziyoyev has pursued an aggressive policy to transform Uzbekistan’s decision-making processes, invigorate civil society, encourage political competition, and address human rights abuses, according to a new report.

The various programs proposed by the new president and presently under implementation hold the promise of reshaping the domestic political landscape, changing the fundamental relationship between the citizen and state, and rebalancing the geopolitical order in a region long relegated as the domain of outside great powers, Anthony C. Bowyer notes in Political Reform in Mirziyoyev’s Uzbekistan: Elections, Political Parties and Civil Society.

The government has also started to address one of Uzbekistan’s most egregious and widespread human rights abuses, the Times adds, the dragooning of doctors, nurses, teachers, students and others to work as effective slave laborers during the annual cotton harvest (right) – an issue frequently highlighted by the Solidarity Center, a core institute of the National Endowment for Democracy, the Washington-based democracy assistance group.

But a report on Uzbekistan released last week by Human Rights Watch concluded that while repression had eased, the arrest of freelance journalist Bobomurod Abdullaev and other journalists, along with the role of the S.N.B. secret police in monitoring, censoring and punishing publications that step out of line, still have “a chilling effect” on free speech and “are standing in the way of dismantling the country’s authoritarian system,” the Times notes.