Saudi Arabia’s apparent killing of journalist Jamal Khashoggi is an unmistakable sign that U.S. foreign policy has swung too far away from its roots in promoting American values abroad, The Washington Post’s Josh Rogin contends. Readjusting “America First” ideology to include the promotion of democratic values is needed to prevent gross human-rights violations such as this, and to win the greater struggle against the expansion of authoritarian influence worldwide, he writes: 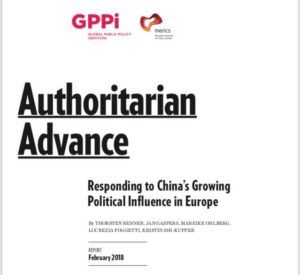 More broadly, the United States has to make a worldwide case that the international system we built with allies over the past 80 years, one based on advocacy for rule of law, open markets, open societies and even human rights, is better than the Putin-Xi model. If the strategic battle is purely about interests, the United States will lose…

“What we are seeing is a sort of Putinization of world order,” said Vance Serchuk, adjunct senior fellow at the Center for a New American Security. “Techniques the Russians pioneered and that went either unchallenged or appeared to be successful, others are now imitating.”

The global democratic regression is leading to a reconsideration of advancing democracy as a strategic objective of U.S. foreign policy, according to a new analysis from the Congressional Research Service. But it would be a mistake to retreat in the face of authoritarian aggression, observers suggest.

“We need a response that includes a meaningful values dimension and plays to our competitive advantage,” said Christopher Walker, a vice president at the National Endowment for Democracy‘s International Forum for Democratic Studies. “We’ve put these things on a back burner, and we’re feeling it now because we need them to compete.”

When did U.S. foreign policy become so transactional? Whatever happened to the arsenal of democracy? The Wall Street Journal’s Peggy Noonan asks.

There are several reasons why U.S. support for democratic politics and rights in regions like the Middle East matter, University of Massachusetts Amherst’s David Mednicoff writes for The Conversation:

In the 1920s, the US pursued isolationism in foreign policy and rejected participation in international organizations like the League of Nations, with disastrous consequences for the suffocation of democracy, notes Christopher R. Browning, ­Professor of History Emeritus at the University of North Carolina at Chapel Hill).

The fascist movements of that time prided themselves on being overtly antidemocratic, and those that came to power in Italy and Germany boasted that their regimes were totalitarian. The most original revelation of the current wave of authoritarians is that the construction of overtly antidemocratic dictatorships aspiring to totalitarianism is unnecessary for holding power, he writes for The New York Review of Books:

Perhaps the most apt designation of this new authoritarianism is the insidious term “illiberal democracy.” Recep Tayyip Erdoğan in Turkey, Putin in Russia, Rodrigo Duterte in the Philippines, and Viktor Orbán in Hungary have all discovered that opposition parties can be left in existence and elections can be held in order to provide a fig leaf of democratic legitimacy, while in reality elections pose scant challenge to their power. Truly dangerous opposition leaders are neutralized or eliminated one way or another.