The United States said Tuesday it would pull its remaining diplomatic personnel from Venezuela, rupturing relations as the country plunges deeper into chaos, the Washington Post reports:

The move comes as Venezuelan society appears to be unraveling amid a nationwide blackout and critical water shortages that have worsened already dire conditions. Some fear that the oil-rich country could become a failed state. The United States has been leading an international effort to force President Nicolás Maduro from power and has recognized opposition leader Juan Guaidó as the rightful president of the country. ….Analysts said the departure of the U.S. diplomats could make it more difficult for Washington to be in touch with opposition leaders. 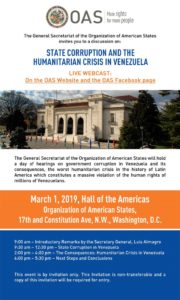 “Now the U.S. will not be present, so its ability to collect information directly and play an active role in Venezuela will be very limited,” said Mariano de Alba, a Venezuelan international affairs expert.

Venezuelan schools and businesses have been urged to close as people across the country brace for another day without electricity. The blackouts began on March 7, and are deepening  Venezuela’s political and humanitarian crisi (HT: Foreign Policy).

Pressure is mounting, says the WSJ’s Mary Anastasia O’Grady as the U.S. moves to tighten financial sanctions in an effort to restore democracy.

There has been a running debate inside the State Department and American intelligence agencies over just how much to reveal about secret findings against Russia and Cuba, which some consider “the true imperialist power” in Caracas, the New York Times adds.

Venezuela’s crisis is starting to look like a stalemate, some analysts suggest.

But the administration’s FY 2020 budget request proposes $40 billion for the State Department and U.S. Agency for International Development (USAID), including provision for supporting transition in Venezuela.

The request cites “continuing democracy assistance for Venezuela and including flexibility to provide additional funds to support a democratic transition or respond to the crisis there, including authority to transfer up to $500 million between foreign assistance accounts.” 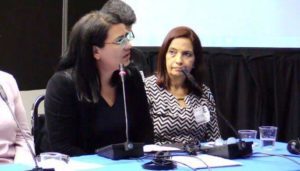 “International solidarity is critical. The United States cannot do it alone,” says Beatriz “Bibi” Borges (left),  the director of the Center for Justice and Peace (CEPAZ), a Caracas-based human rights organization founded in response to mounting human rights abuses by the Chávez-Maduro regime.

“Many believe that US policy is based on geopolitics and economic motives. This is what Maduro’s government wants everyone to believe,” she tells Freedom House analyst Arch Puddington. “We will never resolve the current crisis without a united international movement where everyone is pushing in the same direction. But I consider that so far American policy has followed diplomatic steps looking for a solution.”