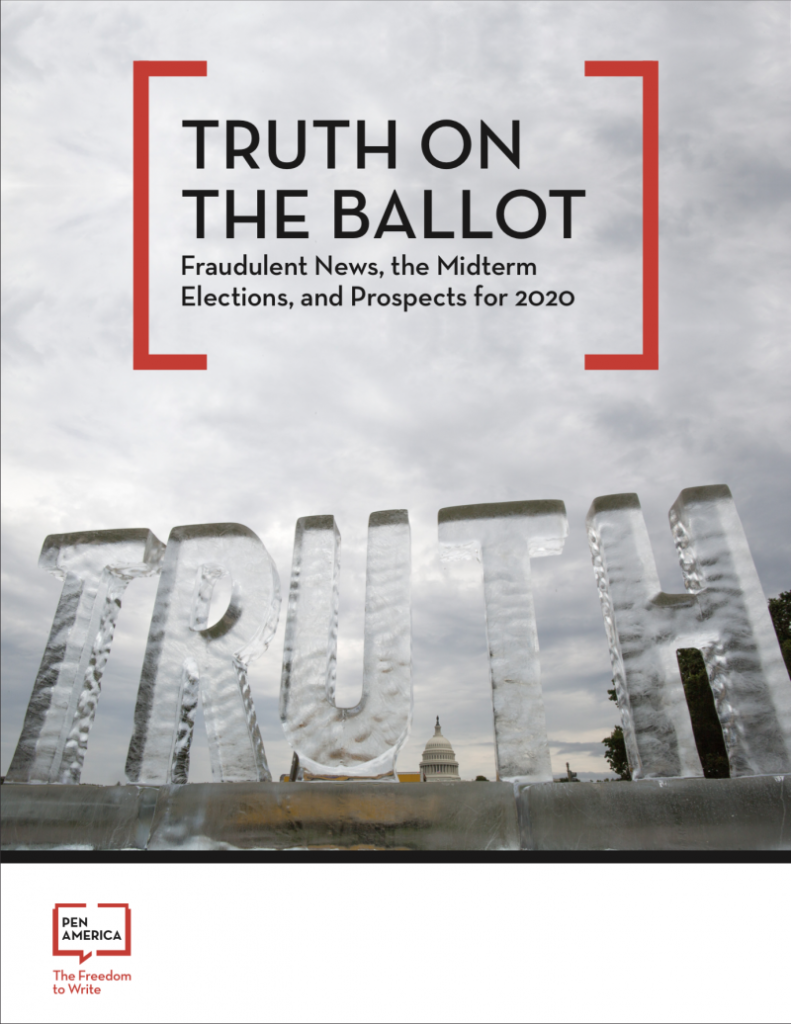 PEN America today released Truth on the Ballot: Fraudulent News, the Midterm Elections, and Prospects for 2020, a robust analysis of efforts to counter fraudulent news that:

“Fraudulent news has become an insidious virus infecting our democracy, feeding prejudices, fanning misperceptions, and shaping voting behavior in ways that can distort election outcomes. We see disturbing signals that domestic political actors are beginning to view disinformation as a necessary evil, believing that they have little choice but to fight fire with fire as opponents and outside actors bring disinformation tactics into our elections,” said Suzanne Nossel, Chief Executive Officer of PEN America.

Efforts to combat disinformation have focused on tactical approaches that target the “supply side” of the problem. But we also need efforts that tackle the demand side of the problem: the factors that make liberal democratic societies today so susceptible to manipulation, argues Ana Palacio, a former Foreign Affairs Minister of Spain and a visiting lecturer at Georgetown University.

Seven decades ago, George F. Kennan warned in his famous article “The Sources of Soviet Conduct” that containment of the Soviet sphere of influence was only part of the response. The United States also – and more importantly – needed to demonstrate the resilience and vibrancy of its society, she writes for Project Syndicate.

“If we do not strengthen societies from within, we cannot hope to withstand threats from without,” Palacio adds. “To succeed, we will need both tactical competency and a strategic vision that leaves no doubt about what we are fighting for.”

Tackling this “demand side” of the disinformation battle comes down to “media literacy and social media literacy,” according to Atlantic Council Distinguished Fellow Daniel Fried, who stressed that societal resilience to propaganda is not a new issue. “Every advance of technology can be and has been subverted for propagandistic purposes,” he explained.

“I refuse to believe that human beings are now much stupider than we were in the 19th century,” said Fried, a National Endowment for Democracy board member, noting that previous generations learned eventually to discriminate between reliable and unreliable sources on new platforms.

Cyber researcher Bruce Schneier and political scientist Henry Farrell have produced a research paper that seeks to divide information into two camps: common political knowledge and contested political knowledge. The danger that propaganda often poses to a democracy is when commonly held political knowledge (the rules of the system) is miscast—particularly online—as contested knowledge, says Chris Zappone, a digital foreign editor and a fellow at the ANU National Security College’s Futures Council.

So how do we bolster democracy’s communication, avoid amplifying distorted facts, and do so without creating additional complexity? One way we can do it is by seeking to take the battle away from the network and pulling it back into the minds of citizens, he writes for the Strategist:

The individual must be able to see through not one, but many simultaneous attempts to sour debate or subvert democracy. To do that, they must understand broadly what information to accept and what to reject, a priori, about their democracy. They must understand the broad information goalposts of democracy: the need for sensible, rational debate that doesn’t descend into conspiracy thinking, or fact-free venting at rivals.