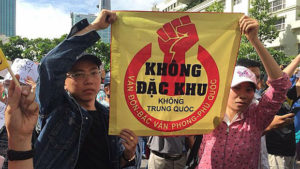 Demonstrators clashed with police in Vietnam in protests against plans for new economic zones that some fear will be dominated by Chinese investors, the BBC adds.

Some of the protesters at Sunday’s demonstrations were also protesting against another draft bill on cybersecurity amid widespread concern the law would cause economic harm and stifle online dissent in the communist-ruled country, Reuters reports.

On Sunday evening, hundreds of demonstrators in Binh Thuan Province defied tear gas and fire hoses to storm the office of the People’s Committee. The authorities said that dozens of police officers were injured in clashes and that the protesters burned cars and vandalized the building, notes the New York Times.

As well as the numerous anti-China signs at the protests, there were also placards that demanded greater democracy. Some protestors carried banners reading “Returning Autonomy For [the] People.” Another placard stated the protest was against the National Assembly’s violation of the Constitution.

“It’s not mainly [about] China. It’s more a sign of the [people’s] deep frustration and dissatisfaction over the authorities’ control of everything,” tweeted Nguyen Phuong Linh, a political risk analyst…. Pham Chi Dung, a prominent independent journalist, likened the events to the “Arab Spring,” writing that June 10 could go down as “one of the most historic days in [Vietnam’s] postwar history.”