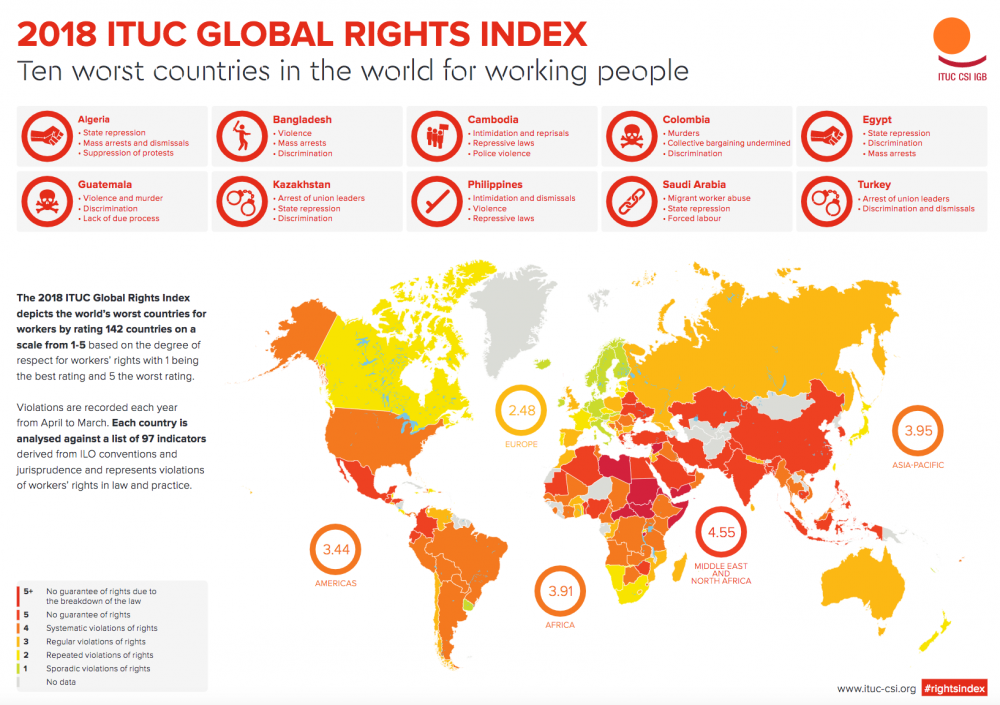 The Economist Intelligence Unit (EIU) Democracy Index classifies four of the countries at this year’s World Cup as “authoritarian” – Saudi Arabia, Russia, Iran and Egypt. The results at the World Cup for these countries could have far reaching geopolitical consequences, observers suggest.

Egypt is one of the ten worst countries in the world for workers’ rights, together with Algeria, Bangladesh, Cambodia, Colombia, Guatemala, Kazakhstan, Philippines, Saudi Arabia and Turkey, according to the Global Rights Index. The index, which catalogues violations of freedom of expression, freedom of association and the right to strike, is published by the International Trade Union Confederation (ITUC), and highlights the shrinking democratic space for workers.

The Middle East and North Africa was again the worst region for treatment of workers, the report states. Peaceful protests were violently repressed and attempts at forming an independent labor movement were systematically crushed by the authorities in Algeria and Egypt.

The current escalation is the latest installment in the government’s sustained crackdown on civil society, they said in a statement, adding that they were “gravely concerned” that the escalation [recently described as a totalitarian turn] may mark the start of a trend that could continue throughout Sisi’s second term.

The arrests have targeted individuals such as former Sisi campaigner received a 10-year prison sentence in military court last month after spending over two years in pretrial detention. This week Abdel Azim, Abu Zeid, and Abbas had their detentions extended by an additional fifteen days.

“As civil society and international nongovernmental organizations, we express our solidarity with Egyptian civil society organizations and call upon the Egyptian authorities to immediately and unconditionally release these individuals,” said the signatories, who include:

Central to Middle Eastern leaders’ freakout over NGOs is the fear that the West is not just assisting people who want to live in more just societies, but rather, through these groups, trying to undermine the region’s ethnic and religious identity by making its societies more Western, argues Council on Foreign Relations analyst Steven Cook. Hence the claims by Middle Eastern leaders that Western institutions are inconsistent with predominantly Muslim societies, as Ahmet Davutoglu — the former Turkish prime minister and foreign minister — argued in his doctoral dissertation, before collaborating in attacks on NGOs while in office, he writes for Foreign Policy.