The coronavirus is leading Iranians to question the relationship between state and religion, putting the theocratic state in “an unusual and awkward position“, observers suggest.

The Islamic Republic had to not only suspend religious rituals that are essential to its political self-image, but also actively discourage believers from practicing those rituals, said Iran expert Azadeh Zamirirad from the German Institute for International and Security Affairs (SWP).

In a crisis, the government is putting religion on hold, with the support of the supreme leader, the highest religious authority in the state, she added. Such a decision has a far-reaching effect on the public and exacerbates the regime’s legitimacy crisis, she wrote for the Stiftung Wissenschaft und Politik (the German Institute for International and Security Affairs, SWP) .

“The closure of shrines that for centuries were considered places of immunity and healing is tantamount to demystifying Shiite beliefs,” Zamirirad said.

A boost for secularism?

A separation of the political and religious spheres is a fundamental contradiction to the Islamic Republic’s concept of order, which categorically rejects secular aspirations, she told Deutsche-Welle.

“However, the current crisis inevitably renews the question of the relationship between religion and state — an issue which Iranian philosophers, sociologists and clergy have been concerned with since before the founding of the Islamic Republic,” said Zamirirad.

While the coronavirus outbreak continues to ravage Iran and its economy, Western intelligence officials and Iran analysts said the Revolutionary Guard and its allies are seizing opportunities amid the crisis to expand their already powerful base while also cracking down on public displays of discontent, the Washington Post reports (HT: FDD). 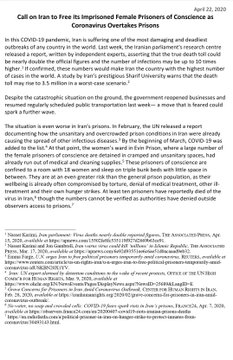 Iran should immediately release its imprisoned women leaders says an open letter co-signed by the Raoul Wallenberg Centre for Human Rights (RWCHR), the Abdorrahman Boroumand Center, the Vice President of the European Parliament, and twenty  other international and Iranian human rights organizations, including partners of the National Endowment for Democracy (NED).

The letter urges the international community “to put pressure on the Iranian authorities to immediately release the following known prisoners of conscience, along with any other political prisoners, to save their lives.” The letter specifically provides a list of Iran’s female political prisoners— none of whom were included in the recently reported temporary prisoner release, since they are considered “security cases.”

The open letter comes on the heels of the UN calling for the immediate release of Iranian prisoners of conscience and for governments to factor in the needs of women in handling the pandemic, recommending that “women’s voices be heard and their leadership recognised, so that the solutions they recommend can be implemented.”

According to the statement published on the website of the International Federation for Human Rights (FIDH), prisoners of conscience are confined to overcrowded rooms at the women’s ward of Tehran’s notorious Evin prison where they have to sleep on triple bunk beds with little space in between and despite running out of medical and cleaning supplies in the early days of the outbreak.

“The virus is not going to be contained anytime soon in Iran,” Hadi Ghaemi, executive director of the New York-based Center for Human Rights in Iran, told AFP.

“This means that places like prisons — which are by definition anti-social distancing — are going to be very, very vulnerable,” he added, describing Iranian prisons as “overcrowded” and noting that the releases covered “only a fraction” of detainees.

Former Canadian Justice Minister and Chair of the RWCHR, Irwin Cotler (left), serves as international legal counsel to Nasrin Sotoudeh, one of the women listed in the letter. Iran’s leading human rights lawyer, she is often spoken of as Iran’s Nelson Mandela. She was sentenced to 38 years in prison and 148 lashes last year— a virtual death sentence for someone in her mid-fifties— for defending women’s rights, children destined for execution, journalists and other political prisoners, until she herself became a political prisoner.

“Nasrin Sotoudeh has sacrificed herself for Iran’s most vulnerable her entire life, until becoming the most vulnerable herself,” said Mr. Cotler, quoting Nobel Peace Laureate, Shirin Ebadi, Nasrin’s Iranian lawyer forced into exile.

Ms. Sotoudeh who is serving a 38-year term for defending women’s rights, has even gone on hunger strike to protest to the keeping of political prisoners in jail despite the coronavirus and putting their lives at risk, Radio Farda’s Maryam Sinaiee adds.

“Nasrin continues to risk her life for others from prison during the pandemic, having gone on hunger strike demanding their freedom,” said Shaparak Shajarizadeh, an RWCHR Senior Fellow who was previously defended by Ms. Sotoudeh.

“While statistics show that women leaders are more successful at containing the virus internationally, Iran is condemning their own to virtual death sentences,” said Yonah Diamond, an international human rights lawyer with the RWCHR.