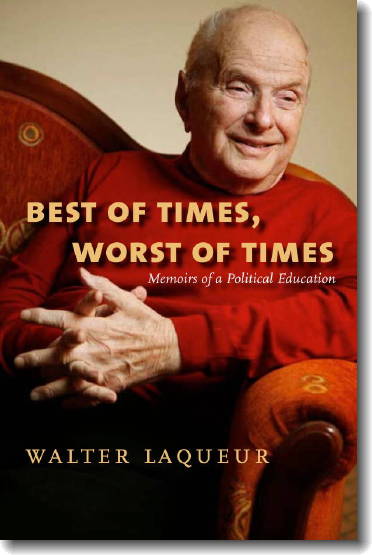 Walter Laqueur, a German Jew who fled Hitler and became one of the preeminent intellectuals of his generation with seminal books dissecting events that shaped the 20th century as well as his own life, died Sept. 30 at his home in Washington. He was 97, The Washington Post’s Emily Langer writes:

His wife, Susi Laqueur, confirmed the death and said she did not yet know the cause. Mr. Laqueur, who wrote about Nazi Europe, the Soviet Union, Israel and the history of terrorism, was a former professor at Georgetown University and chairman of the International Research Council of the Center for Strategic and International Studies in Washington. In prolific writings on Russia, Mr. Laqueur predicted the brand of authoritarianism that Vladi­mir Putin would bring to the country, where other Kremlin-watchers had harbored hopes for democracy after the collapse of the Soviet Union.

An “ingenious autodidact, journalist, historian, intellectual, liberal-conservative activist, sharp-tongued champion, and brilliant analyst, Laqueur heard the grass grow before it had been planted,” Malte Lehming writes for Tagesspiegel. “His antennae made him sensitive to developments that were distressing to lazy minds.”

Bruce Hoffman, a terrorism specialist and colleague of Mr. Laqueur’s at Georgetown, credited Mr. Laqueur with turning an “enormously inquiring and skeptical mind” to the watersheds of modern history, Langer adds:

As a Holocaust survivor, Hoffman said, Mr. Laqueur experienced the “worst and the best of mankind.” Although he nurtured an “abiding faith in the power of democracy,” Hoffman observed, he was primed to see “emerging threats to civil society and to the liberal democratic state,” particularly where Europe was concerned.

Laqueur could be described as a participant-observer of the Cold War, according to University of Maryland professor Jeffrey Herf. In his memoir Best of Times, Worst of Times, he offers a spirited defense of the Congress for Cultural Freedom, the association of intellectuals who waged a political battle against communism in Europe, he wrote for The New Republic:

He recalls the journals Encounter and Der Monat, and the efforts of

Raymond Aron, Daniel Bell, Arthur Koestler, Melvin Lasky, Edward Shils and Ignazio Silone, among others, to offer a centrist and center-left ideological challenge to the communists. Laqueur celebrates the CCF for being right about the key issues regarding Soviet totalitarianism and aggression, and cites George Kennan’s comment about CIA funding for the Congress as a “flap” that was “quite unwarranted.” Instead, Laqueur looks back on the CCF as a superb example of what we now extol as “soft power.”

Laqueur suggests in his book “Putinism” that the Russian leader can be understood by looking at the history of ideas, notably Alexander Dugin and Ivan Ilyin, wrote Daniel Treisman, a professor of political science at the University of California, Los Angeles, and director of the Russian Political Insight project.

In the afterglow of the seizure of Crimea and the intimidation of Ukraine, there was a significant change in the mood of the country, Laqueur observed. According to opinion polls, most Russians are in a triumphalist mood and think of their country as a superpower and the West as isolated and in retreat, he wrote for World Affairs.