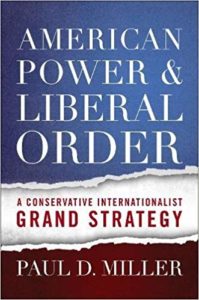 Barack Obama’s electoral success in 2008, running against the Iraq war, returned conservatives to the role of the opposition, and gave them time to reflect on foreign policy fundamentals. At the elite level, Republican internationalists continued to predominate on national security issues, including in the 2012 Mitt Romney campaign, notes analyst Colin Dueck.

But beneath the surface, there was growing discontent at the base of the party with a whole host of international policy-related issues, including immigration, pro-democracy interventions in the Muslim world, and the downside of economic globalization, he writes in The Future of Conservative Foreign Policy, a symposium for the Texas National Security Review.

But most Americans don’t actually believe in isolationism or realpolitik, argues Elliott Abrams,  a senior fellow for Middle Eastern Studies at the Council on Foreign Relations and a member of the board of the National Endowment for Democracy.  Polling in 2018 for Freedom House, the George W. Bush Institute, and the Penn Biden Center found that a 91-percent majority of Americans agreed that “we can’t control what happens in the world, but we have a moral obligation to speak up and do what we can when people are victims of genocide, violence, and severe human rights abuses,” he writes in The Struggle for Conservative Foreign Policy:

Perhaps even more significant, an 84-percent majority agreed that “when other countries become democratic, it contributes to our own well-being.” And a 67-percent majority agreed that “when other countries are democratic, rather than dictatorships, it often helps make the U.S. a little safer” …. One might make not only a moral but a strategic argument for such policies: America’s opponents and enemies try to subvert democracy whenever and wherever they can because they clearly recognize that the spread of democracy is in the United States’ interest.

“They’re right, and the United States should understand, just as they do, that supporting democracy and human rights is in America’s strategic interest and will help to put ‘America First,’” Abrams adds.”

The War of Ideas Within the Democratic World

In addition to the geopolitical and geo-economic challenges from revisionist nation-states and the threat of terrorism from radical Islamists in both Iran and the Sunni world, there is, and always has been, global ideological competition. At the broadest level is the perennial conflict between constitutional democracy and various forms of authoritarianism, including oligarchy, dictatorial one-party rule, and militant jihadism, argues John Fonte, a senior fellow at the Hudson Institute:

That said, the “war of ideas” goes much deeper. Within the democratic world itself exists a deep division over where ultimate authority — that is to say, sovereignty — resides. Is it with sovereign democratic nation-states, or is it with evolving transnational and supranational institutions and rules of global governance (e.g., new concepts of customary international law) that nation-states have either delegated authority to or permitted to expand.67

To put it bluntly, the democratic family is in an argument over the single most important question in politics: Who should rule? ….This global ideological conflict over core values between what one might call “sovereigntists” and “post-sovereigntists” 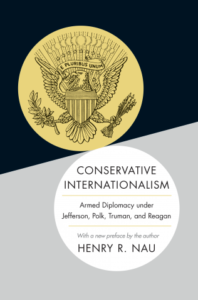 The Cold War was a contest between freedom and oppression worldwide. No such contest exists today. The fight against terrorism and radical Islam is not the equivalent of a new Cold War. It is an ideological conflict, to be sure, as the Islamic State’s establishment of its so-called caliphate suggests. But it does not require the mobilization of American resources against a continental totalitarian power like the Soviet Union. The ideological threat of authoritarianism from Russia and China is far more serious than the threat of terrorism and radical Islam, Henry R. Nau writes in Freedom, Defense, and Sovereignty: A Conservative Internationalist Foreign Policy:

In a world of lesser threat or more equitable power, conservative realists and internationalists complement one another. Internationalists can take credit for the major advances in regime change that occurred after 1945 and 1991. The world today is a far better place for republics such as the United States than the world of 1914 or 1940. Realists, on the other hand, point out that American power is now relatively less significant and that, in a world of greater equilibrium, the United States would do well to preserve, not upset, the status quo. They advise against expanding NATO to Georgia or Ukraine or seeking more than denuclearization and a stable peace agreement on the Korean peninsula. Realists take the world as it is, which is pretty much the same world that the internationalists celebrate, given the postwar spread of republics.

The Trump campaign sought to appeal to conservative non-interventionists who stress U.S. sovereignty, and criticized conservative internationalists who champion U.S. engagement in multilateralism. However, this should not be mistaken for advocacy of retrenchment, Hudson Institute analyst Nadia Schadlow writes in The Conservative Realism of the Trump Administration’s Foreign Policy:

This position is neither isolationist nor anti-European. Rather, it arises out of a deep concern that the European Union is not fulfilling the objective for which it was originally created: to have a strong and capable group of European allies that are a source of order on the continent and can radiate stability in their wider neighborhood. As the various electorates in Europe are indicating, there is growing discontent with the path the European Union has chosen over the past decades and skepticism about the value of having surrendered many competencies to higher decision-making bodies too removed from the nations they are supposed to serve.