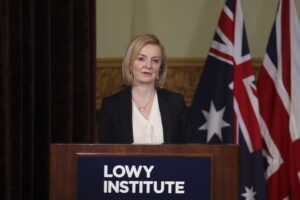 Liberal democracies must “face down global aggressors” like Russia and China which have been “emboldened in a way we haven’t seen since the cold war”, UK foreign secretary Liz Truss said in an address at the Lowy Institute, a Sydney-based think-tank, The FT reports:

Truss used her speech to demand that Russian president Vladimir Putin step back from a possible conflict with Ukraine “before he makes a massive strategic mistake”. … She also argued for stronger alliances between countries including Australia, the UK, Japan, India, Indonesia and Israel to curtail the growing power of “global aggressors”.

“Threats to freedom, democracy and the rule of law are not just regional – they’re global. And that’s why we have to respond together,” Truss added.

Authoritarians “seek to export dictatorship as a service around the world. That is why regimes like Belarus, North Korea and Myanmar find their closest allies in Moscow and Beijing,” she said, adding that liberal democracies should not tolerate “unbridled aggression” by authoritarian governments. 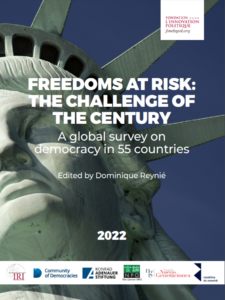 Among the authoritarian powers, China is the one that most worries the democratic world, according to a new global survey conducted across 55 countries. 60% of respondents consider China’s posture on the international stage to be “worrying”; 52% feel the same way about Russia and 37% about Turkey. The deterioration of China’s image is drastic when compared to the same 2018 survey in 42 countries, where less than half (49%) of respondents found it to be worrisome, notes Freedoms at risk: the challenge of the century, a report produced by  the Fondation pour l’innovation politique, International Republican Institute (a core partner of the National Endowment for Democracy – NED), Community of Democracies, Konrad-Adenauer-Stiftung, Genron NPO (Japan), Fundación Nuevas Generaciones (Argentina) and República do Amanhã (Brazil).