There’s has been extensive and ongoing debate about “what went wrong in Central and Eastern Europe” and what explains its various forms of illiberalism and democratic decline. A variety of, sometimes overlapping, explanations have been advanced, argues Seán Hanley, Associate Professor in Comparative Central and East European Politics at University College London’s School of Slavonic and East European Studies:

In the Power 3.0 Podcast episode “Contextualizing China’s Corrosive Capital,” from the National Endowment for Democracy’s International Forum, Martin Hala discusses the impact of China’s economic and political investments in the Czech Republic and elsewhere in Central and Eastern Europe, revealing these investments’ surprising ability to influence and impact governance institutions in the region and beyond. 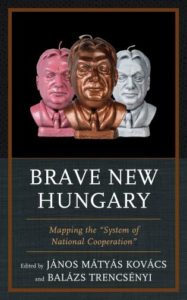 Rather than pathologizing the current Hungarian regime as a result of a unique master plan designed by a cynical political entrepreneur, the authors of a new book show the transnational dynamic of backsliding – a warning for other countries that suffer from comparable deadlocks of liberal democracy. Miklos Haraszti examines ‘Viktor Orbán’s Propaganda State’ in Brave New Hungary — Mapping the ‘System of National Cooperation’, edited by János Mátyás Kovács and Balázs Trencsényi.

In other ways, however, the “what went wrong debate” is mis-framed. Outcomes in Central and Eastern Europe have certainly turned out differently from what was expected.  But this tells us that intellectuals and social scientists have yet again gone wrong in their expectations, more than that the region has sharply changed course, Hanley suggests.

As Seymour Martin Lipset (below) suggested, we need to study democratization and its alternatives in Eastern Europe with a resolute ‘pessoptimism’. A scepticism about historical change cutting strongly in any particular direction, that does not rule it. A sense that positive and negative change may sometimes be intimately intertwined, he adds. This perhaps means recalibrating our thinking in four overlapping ways:

This is an edited version of a presentation given at the “1989 – Great Expectations 30 years later” conference organised by the European Dialogue Expert Group and the Gorbachev Foundation, Moscow, 9 December 2019. RTWT.