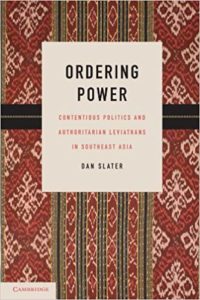 When democracy erodes, what remains? When a democracy backslides, where does it wind up? When democracy dies, what is born? asks Dan Slater, a Professor of Political Science and Director of the Weiser Center for Emerging Democracies at the University of Michigan.

The differences between these two undemocratic beasts are legion, adds Slater, the author of Ordering Power: Contentious Politics and Authoritarian Leviathans in Southeast Asia:

Competitive authoritarian (CA) regimes have shown themselves to be remarkably unstable, argues Christopher Carothers, a Ph.D. candidate and Ashford Fellow in the Department of Government at Harvard University. Over the medium-to-long term, CA regimes often see their stability erode precisely because they feature relative political openness and competition. There are at least four noteworthy mechanisms by which CA’s relative openness can lead to its breakdown, he writes in the NED’s Journal of Democracy. 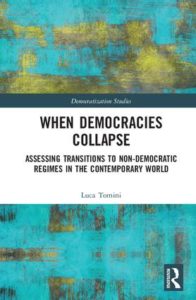 While the process of democratization is an established field of study, the reverse phenomenon of de-democratization garners less attention even in the face of democratic regression or breakdown, notes Luca Tomini, author of When Democracies Collapse: Assessing Transitions to Non-Democratic Regimes in the Contemporary World. De-democratization comprises two distinct processes, he suggests: