The prominent Ukrainian anti-corruption activist Kateryna Handziuk died on Saturday, The New York Times reports, several months after she was attacked with a liter of concentrated sulfuric acid.

“Those who ordered the murder of Handziuk now watch how society reacts,” Mustafa Nayyem, a member of Parliament, said in a telephone interview. “Will we accept this murder, or will we fight?”

I met Kateryna in June 2017 while visiting Kherson, the region adjacent to Crimea, writes Vitaliy Shpak, Program Officer for Europe at the National Endowment for Democracy. At that point, she was serving as deputy mayor of the regional capital (population of about 300,000) and was one of those activists who had decided to go into government on the Euromaidan wave hoping to make a difference. 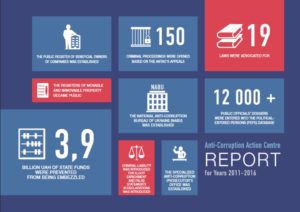 She talked about local political life and the region following the Euromaidan protests and annexation of Crimea. She argued that both the Ukrainian government and international organizations were not paying enough attention to vulnerable regions and warned that allies of the discredited pro-Russian former president Viktor Yanukovych and criminal groups still retained political power in Kherson.

Kateryna was very vocal about local corruption and Russian influence in the region. First, as an activist and active participant of both Maidans (2004, 2013), as volunteer mobilizing public support for internally displaced people leaving annexed Crimea, and later as a local councilor and deputy mayor of Kherson, she was involved in local politics and was only too well aware of entrenched interests. She was not reticent about articulating what she considered the greatest threats to a normal future for her country. Her Facebook page was always full of postings about the corruption of local police, Russian proxies in local politics, and attacks on other activists across the country. On July 15, Kateryna wrote about how slow and inefficient the investigation into the attack on her friend and journalist Serhiy Nikitenko was. Two weeks later, on July 31, she was attacked outside of her apartment building and doused with acid.

Kateryna was in hospital since the July attack suffering from burns covering 30 percent of her body. In September, Hromadske released a video in which Kateryna said: “I know I look bad. But still not as bad as current Ukrainian justice and rule of law. I’m getting treatment. But nobody is curing our justice system.”

The attack and her eventual death has mobilized civil society across the country. Thousands of people have shown up in front of the Interior Ministry demanding a proper investigation. In recent months, over 70 activists have been attacked, beaten up or shot, including several affiliated with NED grantees. The attacks, including the fatal assault on Kateryna, and lack of robust investigations are clear indications that despite progress, comprehensive and irreversible reforms have not taken place yet, particularly in judiciary and law enforcement.

Continuing impunity of corrupt officials and criminal elements undermine public faith in rule of law and, by extension, the government institutions and reform process as a whole. This is of crucial importance as Ukraine heads in to presidential and parliamentary elections in 2019, the campaigns for which have already de facto begun. Public discontent and anger create fertile ground for manipulation by nefarious political players and further stymie the country’s democratic progress.

The full story is here.