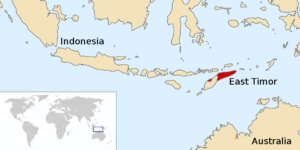 On the face of it, East Timor would not seem like the most natural place to have built a democracy ranked by Freedom House, in its 2021 edition of Freedom in the World, as “Free.” In fact, this ranking makes East Timor (aka Timor-Leste) the only country in Southeast Asia, where democracy has been regressing for over a decade, to receive that ranking, writes Council on Foreign Relations analyst Josh Kurlantzick.

Timor-Leste’s 15 years of self-government have been filled with reconciliation, periodic outbreaks of violence and dynamic personalities that continue to shape the country, according to this episode of “Global,” the podcast of the International Republican Institute (IRI), a NED core institute. Guests include: Nobel Peace Prize laureate and former President of Timor-Leste Jose Ramos-Horta, who also heads the World Movement for Democracy; author of East Timor: The Price of Liberty Damien Kingsbury; and IRI Senior Advisor for Asia Johanna Kao.