Failure to predict the emergence of the leftist-Islamist alliance that won Iraq’s May elections resulted from a focus on elite politics and sectarian dynamics that obscured these underlying cross-ideological interactions occurring at the societal level, according to Benedict Robin, a researcher at the University of Edinburgh.

As in Egypt, an image of Iraq’s societal weakness meant that most analyses missed its potential for broader mobilization. Applying the lessons of the Arab Spring to Iraq could help illuminate not only surprising election results but also the complex and innovative strategies of Iraqi civil society that have so far remained hidden from view, he writes for the Washington Post’s Monkey Cage: 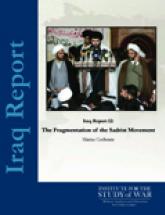 Iraqi politics is often construed as the politics of elites who strike deals among themselves to divide the spoils of power. The flip side of this coin is a supposed societal weakness in which non-elites are unable to mobilize against the political class. This weakness resides in both the fragmentation of Iraqi society into isolated enclaves divided by sect, ethnicity and region, as well as the dependency of these enclaves on political elites who control access to services and jobs.

A similar notion of societal weakness dominated studies of Egyptian politics before the 2011 revolution. Many thought the various social groups opposing the Mubarak regime were too fragmented to mobilize collectively against the state. The 2011 revolution, which saw an unprecedented degree of cooperation between the Islamist Muslim Brotherhood, secular-liberals, and the trade union movement, shattered this understanding and led social scientists to revise their theories.

“This revived an interest in bottom-up politics, social movements and the complex strategies by which civil society resists political domination,” Robin adds. “This new attention to societal dynamics helped replace the notion of Egypt’s societal weakness with a more nuanced understanding of its latent potential for broad mobilization.” RTWT