Less than a decade ago, it seemed self-evident that Russia, despite all of its cultural and political differences, was reclaiming its rightful place as part of the Western world. In a piece for a German newspaper, Vladimir Putin wrote of a “Europe from Lisbon to Vladivostok” that aspires to free trade and shares common values, notes analyst Yaroslav Trofimov.

But now Russia is increasingly looking East, toward an uneasy alliance with an illiberal and much more powerful China, he writes in a must-read Saturday essay for the Wall Street Journal:

The impulse to abandon Russia’s Western orientation was recently articulated by Vladislav Surkov [right], a close aide of Mr. Putin who advised him on the Ukrainian crisis. “Russia spent four centuries heading toward the East, and then another four centuries toward the West, without taking root in either place,” Mr. Surkov wrote in a much-discussed academic article in April. From now on, Russia—an eternal “half-breed”—will face “a hundred (two hundred? three hundred?) years of geopolitical solitude.”…..The profound disillusionment also stems from the failure of policies that aimed to bring Russia closer to the West following the Soviet Union’s breakup—a failure that many Western officials now admit wasn’t just Moscow’s.

“The West was not sufficiently imaginative or creative in how to embrace Russia back when Russia had the intention of becoming a normal country,” said Lithuania’s former foreign minister Vygaudas Usackas, the European Union’s former ambassador to Moscow, who now heads the Institute of Europe think-tank. “As a result, we are finding a Russia that is searching for its identity between Europe and Asia—and that, in the meantime, has become an assertive and aggressive power with the stamina and the resources to discredit and undermine Western democracies.”

President Donald Trump’s summit with President Vladimir Putin on July 16 suggests that the U.S. is courting autocratic and illiberal states like North Korea and Russia because “Washington wants as many states as possible to maintain their strategic distance from Beijing,” according to Reuben Steff, Lecturer in International Relations and Security Studies at the University of Waikato.

“This is a task that will become more difficult as China’s power continues to rise and America finds it harder to reassure its allies that it can maintain its dominance in the region,” he writes for the Conversation:

A number of these states have authoritarian governance systems, forms of illiberal democracy or may be trending in this direction. They do not share America’s governing liberal ideology. This ideological difference could complicate America’s efforts to keep these states out of China’s orbit, which claims to have no interest in the domestic affairs of other states.

Some observers are worried that the summit will see the U.S. concede recognition of Russia’s invasion of Crimea.

Daniel Fried (left), a former assistant secretary of state for European and Eurasian affairs [and a National Endowment for Democracy board member], is worried there is no clarity within the administration about the goals of the summit, he tells Foreign Policy. “I can’t tell you there’s no chance” the U.S. would recognize Russia’s annexation of Crimea, he adds. 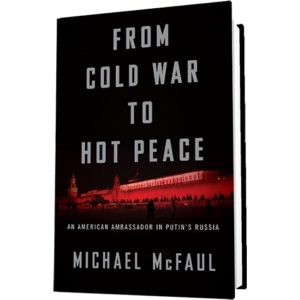 Placing responsibility for the rapid deterioration in U.S.-Russian relations squarely on the shoulders of the Russian president has its appeal, notes Daniel Beer, a reader in Russian history at Royal Holloway, University of London.” It holds out the promise that Kremlin policy toward the West might pivot once again when Putin finally retires or is pushed out, he writes in a NY Times review of Michael McFaul’s From Cold War to Hot Peace: An American Ambassador in Putin’s Russia:

Maybe so, but the more pessimistic view is that Putin represents a now-entrenched revanchist nationalism that sees the liberal international order as a mere smokescreen for the advancement of Western political agendas. Deep-rooted antagonism toward the United States might well endure long after Putin has gone.

As McFaul himself laments, “the hot peace, tragically but perhaps necessarily, seems here to stay.” 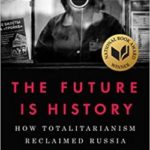 Like many of its predecessors, the Bush administration engaged in democracy promotion as a means of spreading stability and prosperity. But Russia rejected both the idea of moving past MAD and the historical inevitability of democratic change as profoundly threatening to its interests, according to Carnegie analysts Eugene Rumer, Dmitri Trenin and Andrew S. Weiss.

Instead, the Kremlin developed and articulated an alternative, illiberal, anti-Western narrative, they suggest:

The Russian narrative includes broken U.S. promises not to expand NATO, interference in Russian domestic politics and use of double standards when criticizing it for its democracy deficit, refusal to treat Russia as a peer, reliance on economic sanctions to achieve desired political and diplomatic outcomes, withdrawal from the ABM Treaty, unilateral use of military force, and regime change and destabilization under the guise of democracy promotion in countries within Russia’s self-proclaimed sphere of interests or that are simply friendly to it.

Russia’s leader may be capable of change, says Mikhail Khodorkovsky, 55, Putin’s most prominent opponent in exile, who has sought to promote democracy Russia through the Open Russia movement.

“My aim is not the overthrow of the president, but the establishment of parliamentary democracy. If Putin is prepared tomorrow to democratize the country himself, then I’m all for it,” he tells Der Spiegel.

But the Kremlin’s reaction to Ukraine’s Euromaidan revolution suggests otherwise, he concedes.

“I had hoped that Ukraine would become a model for Russian society. Unfortunately, Putin has succeeded in preventing this. And, unfortunately, some people in Ukraine helped him to do so — out of greed,” he said.

“Other than that, though, I’m not disappointed. Ukraine is a large country, and no rapid changes could be expected. If the Ukrainians prevent a relapse into authoritarianism, the country will become a normal democracy after one or two changes of government.”

A divided EU – with an unstable Germany, a UK on its way out and renegade central eastern member states – indicates the dead end of the normative approach to foreign relations, according to analyst Vessela Tcherneva. Europe appears to be only of interest to the US as an ally in the competition with Russia and China, she writes for the European Council on Foreign Relations.

As the highly anticipated Putin-Trump summit nears, pundits are discussing the main challenges of the meeting and potential outcomes for the U.S-Russia relationship, the Institute of Modern Russia reports:

On the domestic front, as negative opinions about the pension reform persist, the Kremlin prepares to respond. One of the key political developments in the capital was the announcement of the list of candidates who will run for the Mayor’s and the Moscow Region Governor’s offices in the September elections. No member of the liberal opposition passed the electoral filter. RTWT

At the heart of the long-standing conflict between Russia and the United States is a disagreement about their respective approaches to the conduct of foreign affairs, the Carnegie analysts add.

While the United States has “traditionally championed (even though admittedly it has not always adhered to it) the international liberal order—including political liberalism, economic liberalism, and liberalism in international relations—and actively promoted liberal values beyond its borders,” they notes, “Russia has adhered to a very different—realist—philosophy and stressed the importance of national interests rather than liberal values in the conduct of its foreign policy.”

“As much as the United States has sought to promote the international liberal order, Russia has resisted its expansion.” RTWT