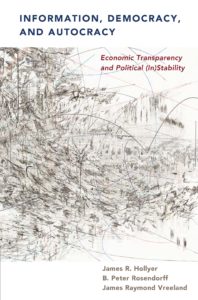 Our recent research supports this view — democracy is less likely to survive in a poor informational environment. Our book shows that when voters are poorly informed, enough voters are more likely to make mistakes at the polls, they write for the Post’s Monkey Cage blog:

This leads to the election of incompetent — and perhaps corrupt or self-dealing — governments. Here’s why this matters: Such outcomes at the polls lower public confidence in democracy and generate support for emergent anti-democratic forces…..

Our book, “Information, Democracy, and Autocracy,” and a recent article present evidence in line with our theory. Using an original measure of the transparency of economic outcomes, we show that democracies with low levels of transparency are less likely to survive. Incumbents are more likely to be removed from office through extra-constitutional means — coups or assassinations — especially when the economy is performing poorly. Highly transparent democracies survive, even under poor economic conditions.