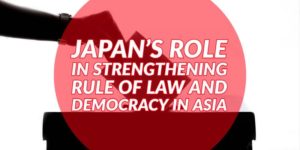 The rise of populism and protectionism in many western countries and growing assertiveness of authoritarian powers has called into question the future of the rules-based liberal international order. As the most populous and economically dynamic region in the world, Asia will feel the impact of growing discontent with globalization and democratic norms and values that have shaped the post-WWII liberal international order.

As the first Asian country to modernize and the region’s most advanced economy, what is Japan’s role in supporting and strengthening the liberal international order in Asia? What are the implications of Japan’s reorientation toward a “values-based” foreign policy mean for rule of law and democratic development in Asia? With uncertainty surrounding the role of the United States in the region and China’s growing influence, can Japan play a leadership role in defending the liberal democratic norms and values against these challenges?

Maiko Ichihara is an Associate Professor in the Graduate School of Law and the School of International and Public Policy at Hitotsubashi University. Ichihara is also a member of the “Rising Democracies Network,” a research network of leading experts on democracy and foreign policy, dedicated to examining the growing role of non-Western democracies in international democracy support and conflict issues, hosted by the Carnegie Endowment for International Peace.

Takako Hikotani is Gerald L. Curtis Associate Professor of Modern Japanese Politics and Foreign Policy. She previously taught at the National Defense Academy of Japan, where she was Associate Professor, and lectured at the Ground Self Defense Force and Air Self Defense Force Staff Colleges, and the National Institute for Defense Studies. Her research focuses on civil-military relations and Japanese domestic politics, Japanese foreign policy, and comparative civil-military relations.

Daniel Twining joined the International Republican Institute as president in September 2017, where he leads the Institute’s mission to advance democracy and freedom around the world. He heads IRI’s team of nearly 500 global experts to link people and governments, motivate people to engage in the political process, and guide politicians and government officials to be responsive to citizens.

Derek Mitchell is the new president of the National Democratic Institute (NDI). Two decades earlier, Mitchell spent four years at NDI, serving as Senior Program Officer for Asia and the former Soviet Union. In between, Mitchell has had a distinguished career in and out of the U.S. government, in which he has witnessed the connection between democracy and international security.