On Saturday, Andrés Manuel López Obrador, a maverick leftist, will become president of Mexico and launch what he has called the country’s “fourth transformation.” A month later, Jair Bolsonaro, a maverick conservative, will become president of Brazil and begin what he claims will be a radical reforging of society and the economy. The two leaders are part of the epochal changes that are sweeping Latin America’s two biggest economies, notes FT Latin America editor John Paul Rathbone.

Who though is the bigger threat to liberal democracy? Almost certainly “peace and love” Mr López Obrador rather than “lock ‘em up” Mr Bolsonaro. That may sound provocative but it is only empirical, he contends:

Mr López Obrador will enjoy almost unconstrained power when he takes office. His party has majorities in the Senate and the Chamber. He has vast popular support, dominates his cabinet, inherits a relatively healthy macroeconomy thereby freeing him from immediate market pressures, and faces a feeble judiciary. Furthermore, he wants even more power. He plans to create federal “super delegates”, answerable to the executive, to monitor all state programmes and their budgets. At the same time, public sector wage cuts have prompted an exodus of technocrats from the civil service, weakening Mexico’s few independent institutions that could check his power.

Mr Bolsonaro faces the exact opposite. He is hemmed in. His party has a minority in both houses of Congress. He does not control state budgets. He faces an aggressive press, a fiercely independent judiciary, is subject to more market discipline given Brazil’s weak economy, and has appointed heavyweight technocrats to his cabinet. Unlike Mr López Obrador, his instincts seem to be to decentralise power, including independence for the central bank.

What makes a democracy stable? And which processes potentially lead to instability of a democratic system? Complex systems theory offers a range of powerful new tools to analyze the stability of social institutions in general, and democracy in particular, research suggests.

Economic inequality, political polarization and the health of democracy are closely linked, according to a new analysis. Polarization entails a breakdown of common faith, leading members of one partisan coalition to ignore potential threats to democracy, based on the belief that having their opponents in power would be worse, the authors suggest: 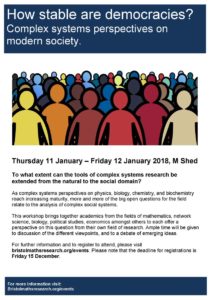 This is because democracy presupposes a basic equality of influence. But when economic inequality increases, so do differences in influence over institutions. Those who have large financial resources can better influence institutional change than those who do not. A shock increase in economic inequality—such as resulted from the policy responses to the 2008 financial crisis—leads to corrosion of the relationship between less well-off voters’ choices and institutional outcomes. It may even lead to effective or actual non-democratic rule.

“There is little work on the circumstances under which instability of democracy might happen,” said Dr. Karoline Wiesner of the University of Bristol. “So, we lack the theory to show us how a democracy destabilizes to the point it is not describable as a democracy anymore.”

“Citizens of democracies are becoming less content with their institutions. They are increasingly willing to ditch institutions and norms that have been central to democracy.”

The mutual relationship between feedback and stability is vital to the health of democratic systems in particular, and extreme diversity of opinion can be a cause of instability, the research paper – Stability of democracies: a complex systems perspective – suggests:

While a degree of diversity and partisan disagreement is healthy and even necessary in a democracy, too much may lead to an inability to understand and solve joint problems. Radicalization and polarization compound this.

Radicalization occurs when political elites try to reshape politics to secure a permanent advantage by bending rules, ignoring norms, and pursuing strategies that seemed off limits. Polarization involves a breakdown of common faith. It leads members of one partisan coalition to ignore potential threats to democracy, based on the belief that having their opponents in power would be worse. Finally, the authors explored how social institutions can be destabilized by the erosion of social norms.

“One of our important messages in this paper is that a stabilizing feature of a democratic system—opinion exchange—breaks down when this possibility for engagement and debate is destroyed because messages are disseminated in secret, targeting individuals based on their personal vulnerabilities to persuasion, without their knowledge and without the opponent being able to rebut any of those arguments,” said Dr. Wiesner.

“These impacts of social media on public discourse show how democracies can be vulnerable in ways against which institutional structures and historical traditions offer little protection. Complex systems science offers a unique entry point to study such phenomena.” RTWT