Russia’s prime minister will visit Belarus today, Reuters reports (HT:CFR) and Belarus’s defense minister will be in Moscow tomorrow as the two countries step up diplomacy in the face of continued protests (CNN) over Belarus’s disputed presidential election.

“The stakes for Moscow are high…[Russian President Vladimir Putin] has many reasons to hesitate before deciding to prop up a failed regime,” adds CFR’s Stephen Sestanovich, a former National Endowment for Democracy (NED) board member.

“At least until this week, Putin appeared to be holding back. Lukashenko has skillfully played the West and Moscow against each other in recent decades, cozying up to one in order to entice concessions from the other; this has not endeared him to Putin,” Daniel B. Baer writes for Foreign Policy.

Continued demonstrations in Russia’s Far East and the historic pro-democracy protests in Belarus are gaining wide support, notes the Center for European Policy Analysis. The sustainability of the Putin regime is coming into question. A declining economy and the mounting human and financial costs of coronavirus threaten the Kremlin’s ability to maintain control of the population. The recent constitutional amendments ensuring Putin’s “re-election” in 2024 are in place, but will he make it to the next term, or are these new political movements enough to finally topple the Russian president? What comes next for Russia after Putin? 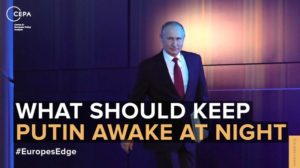 Join CEPA for a discussion on the future of Russia, featuring Mikhail Khodorkovsky as he discusses his recently published book , where he lays out a vision for the future of the country. RSVP

Wednesday, September 9, 2020. 10:00 a.m. – 11:00 a.m. EDT CEPA is hosting this event online. To take part in the Q&A, please register via Zoom. Please note, there are a limited number of interactive spaces available. To tune in to the livestream, participants can also watch via the CEPA Events Page, Facebook, or Twitter.