A former close ally of Turkish President Tayyip Erdogan applied on Monday to register a new political party to challenge his ruling AK Party, saying Turkey needed a “fresh start” and calling for reforms to strengthen the rule of law and democracy, Reuters reports.

Over the past year, the latest Freedom in the World survey notes that “electoral integrity, judicial independence, and safeguards against corruption” have been undermined, and democratic norms violated through “fierce rhetorical attacks on the press, the rule of law, and other pillars of democracy,” Council on Foreign Relations analyst Stewart Patrick writes for World Politics Review.

Troubling developments around the rule of law continue to raise concerns for the future of fair and functioning societies, the World Justice Project reports. Since 2009, it has documented these trends in its annual WJP Rule of Law Index, now covering 128 countries and jurisdictions. Based on more than 130,000 household surveys and 4,000 legal practitioner and expert surveys worldwide, the 2020 Index provides citizens, governments, donors, businesses, and civil society organizations around the world with a comprehensive comparative analysis of countries’ adherence to universal rule of law principles. 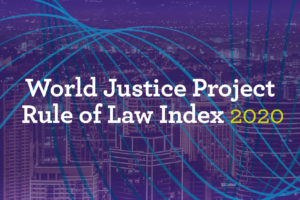 Join USIP and the World Justice Project to delve into the latest findings from the WJP Rule of Law Index 2020 at the United States Institute of Peace (USIP) on Wednesday, March 11, 2020 from 2:00 PM to 3:30 PM. Please register for the event here.

“Global Trends in the Rule of Law.”

At a recent NED presentation (below), Professor Martin Krygier critiqued existing ways of thinking about the rule of law, offered alternative frameworks and explored how adapting our intellectual approach might improve the global community’s ability both to promote the rule of law and to defend it against the global efflorescence of populist and authoritarian enemies.