With autocrats and illiberal forces resurgent, democracy is in danger worldwide, according to Stanford University’s Larry Diamond. Yet the world is at a “fluid moment” in which trends “could swing either way” towards greater autocracy or a fresh democratic wave, he told a National Endowment for Democracy (NED) celebration of his life and work (above).

The greatest unmet need is in the realm of ideas, shaping the zeitgeist through democratic narratives and confronting autocratic sharp power, he added, echoing former intelligence chief James Clapper’s call for a new U.S. Information Agency (USIA) “on steroids” to counter disinformation and propaganda.

The U.S. and other democracies have been “completely outmatched” by Russia and China, Diamond said. “We are up against a monster now in terms of the disinformation machines of China, Russia, Iran, and other malign states in the world and we have not adequately risen to that challenge.”

And while the work of the Global Engagement Center is commendable, efforts to advance pro-democracy narratives “are not assertive, innovative or imaginative enough,” he added. 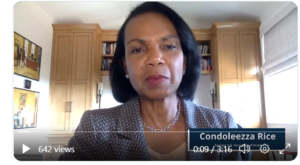 “Those who are on the front lines in trying to bring a better life and a more democratic future to their countries have found Larry Diamond as an ally,” said former Secretary of State Condoleezza Rice (right). Nobody is more deserving of NED’s Democracy Service Medal, she added, citing his considerable contributions to the advancing democracy and human rights.

Paying tribute to Larry’s work on democracy in Africa, Afrobarometer’s Boadi said that democracy is primarily a supply side problem across much of the continent since popular demand for democratic governance has for the most part been consistently high.

Former NED President Gershman recognized Diamond’s integration of academic research and democracy activism, noting his efforts in support of the World Movement for Democracy and in highlighting the struggles of grass roots activists in the film, From A Whisper To A Roar (below).

The founding co-editor of the Journal of Democracy has been a major source of intellectual innovation in the field of democracy studies, said anti-corruption expert Mungiu-Pippidi. 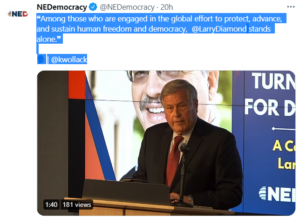 Larry was “the first to push further from the notion of consolidation of democracy to the quality of democracy,” she observed.

His Stanford colleague Fukuyama paid tribute to Larry’s teaching prowess, highlighting the global diaspora of Larry’s former students, so many of whom are advancing democratic values and practices from positions of power and influence.

“Among those who are engaged in the global effort to protect, advance, and sustain human freedom and democracy, Larry Diamond stands alone,” said NED chair Ken Wollack (above).

❝I hope my receipt of this medal will be seen as a reaffirmation of the vital role of ideas, research, and understanding play in the struggle to defend and advance democracy.❞