The United States will cut assistance to Tunisia because of its government’s “deviation from democracy,” the head of the United States Agency for International Development (USAID) said yesterday.

“Tunisia will receive less money in the 2023 budget,” Samantha Power told Congress, adding that the move is in response to the Tunisian government’s repression of civil society, undermining the rule of law and violation of democratic standards.

Without specifying the precise amount, she said the cut is due to “the disappointing turn taken by the current government” and the “noted slip from the supremacy of the law and democratic institutions”.

Thousands of Tunisians protested on Sunday against President Kais Saied, demanding a return to the normal democratic order and rejecting his replacement of the independent electoral commission with one he named himself, Reuters reports.

“The people want democracy” and “Saied has led the country to starvation” were two slogans chanted by the protesters at the main rally in central Tunis, the biggest against him in months, a week after a far smaller demonstration in his support.

“In order to be successful, the anti-July 25 opposition must appeal to a broader base of political parties and civil society forces,” said Alyssa Miller, a Tunis-based researcher for the German think tank GIGA Hamburg. Therefore, she considers the latest statements by the country’s influential labor union, the Tunisian General Labor Union (UGTT), as significant.

“In the past, the UGTT has been largely neutral or cautiously supportive of Kais Saied, and it was recently tapped by the president, along with the Tunisian League for Human Rights, to oversee the composition of a constituent assembly and to write a new constitution which would be put to a national referendum on July 25th,” Miller told DW. However, the two organizations have signaled they would not support Saied’s process “unless it were inclusive,” she added. 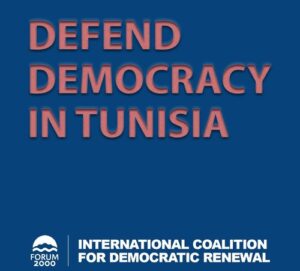 What should the US/EU do to help restore democracy in Tunisia? President Kais Saied is preparing to organize a referendum on July 25 (in 2 months) on as-yet unknown and undisclosed “constitution” to be written by an as-yet unknown and unannounced committee to be appointed solely by Kais Saied himself, adds CSID. The US has been trying to convince Kais Saied to change course and restore democracy and respect the constitution since last July, but so far, he is not listening and is moving forward with imposing his vision and his new constitution, which will enshrine one-man rule for years and perhaps decades to come.

The Center for the Study of Islam & Democracy (CSID) hosts a panel to discuss what the US/EU should do to signal their displeasure in a more forceful and clear way.

Panelists: Larry Diamond, Director of the Center on Democracy, Development, and the Rule of Law (CDDRL) at Stanford’s Freeman Spogli Institute for International Studies (FSI); Shadi Hamid, Senior Fellow in the Center for Middle East Policy at Brookings; Sarah Yerkes, Senior Fellow in Carnegie’s Middle East Program; Sharan Grewal, Assistant Professor of Government at the College of William & Mary and a nonresident senior fellow at the Project on Middle East Democracy (POMED), a partner of the National Endowment for Democracy (NED). Moderator: Radwan Masmoudi, founder and president of the Center for the Study of Islam & Democracy (CSID). May 23, 2022 11:00 AM ET RSVP