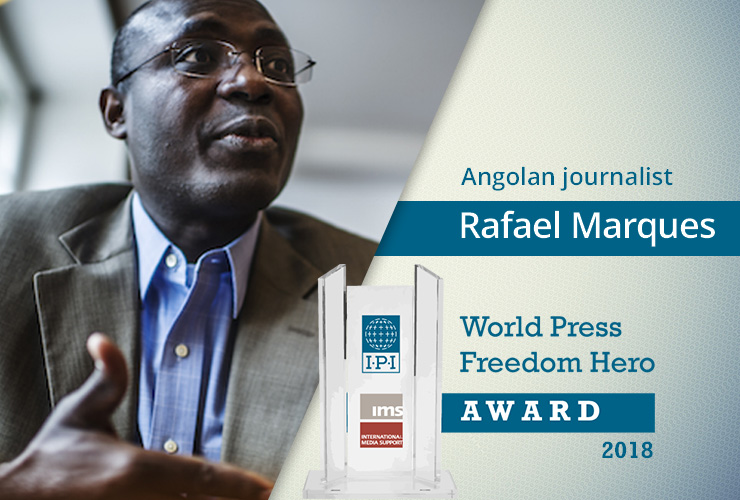 Recently described as a thorn in the side of Angola’s kleptocratic regime, Marques returned to court this week to face a vindictive prosecution widely viewed as an attempt to stifle his transparency advocacy. He and fellow activist Mariano Brás Lourenço, face charges of insulting state authority in a 2016 article exposing a real-estate deal involving Angola’s attorney-general.

“I am honored because this award comes at a time when I am on trial for exposing high-level corruption, while President Lourenço claims to be fighting it,” said Marques, who received the National Endowment for Democracy’s 2017 Democracy Award. “Yet it is unfitting to receive an international award for doing the basic work of exposing the ills of my own country in order to right them for the common good.”

The World Press Freedom Hero award honors journalists who have made significant contributions to the promotion of press freedom, particularly in the face of great personal risk, the IPI writes:

Marques began his career as a reporter for the state-owned newspaper Jornal de Angola in 1992, before being fired over his willingness to deviate from the line set by Angolan President José Eduardo dos Santos, who ruled the former Portuguese colony with an iron fist between 1979 and 2017.

Much of Marques’s crusading work has focused on the kleptocratic management of natural resources in Angola, whose vast oil and mineral reserves have enriched a small ruling elite even as millions remain

in poverty. His internationally best-known work, the 2011 book “Blood Diamonds: Corruption and Torture in Angola”, detailed allegations of murder, assault, arbitrary detention, and forced displacement of civilians in relation to the country’s lucrative diamond-mining industry. After a group of top Angolan generals implicated in the book filed charges, Marques was again given a six-month suspended sentence for defamation.

IPI Executive Director Barbara Trionfi condemned the ongoing court case against Marques, in which he and a colleague, Mariano Brás Lourenço, face charges of insulting a public authority over a 2016 article scrutinizing a real-estate transaction involving Angola’s then attorney-general. T

“Angola must end its harassment of Mr. Marques and all other journalists in Angola”, she said. “If President Lourenço is serious about bringing change, he must allow for critical, independent media to flourish.”