Dr. El-Ghobashy addresses her unconventional analysis of Egypt’s revolutionary 2011–2014 period, why the revolution was defeated, and how much remains unknown about the pivotal events of those years. 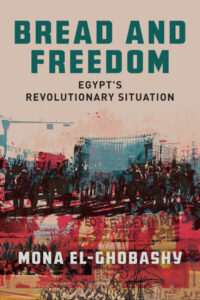 The heterogeneous movements demanding change before 2011 did so in the name of democracy and human rights, drawing on metaphors of rebirth and awakening, El-Ghobashy writes. These were political times when “Revolution became a dirty word,” and it was democracy that carried the mantle of emancipation and the restoration of human dignity.

A major rift developed between two major forces, she observes:

This familiar rift between reformists and revolutionaries should not obscure an irony, El-Ghobashy adds: the reformists, especially the Muslim Brothers with their nationwide organization, were the ones capable of filling streets with their cadres to pressure the generals and occasionally did so; secular groups’ forte was not sheer numbers, but effective use of print, social, and visual media to influence public opinion. 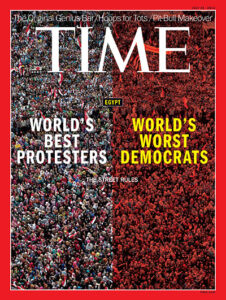 Observers then and since were appalled by how “Egyptians” greeted the military’s removal of democratically elected president Mohamed Morsi of the Muslim Brotherhood; as the Time magazine cover chided, “Egypt: World’s Best Protesters, World’s Worst Democrats,” she recalls. Yet Egyptians were deeply divided between those who clamored for the ouster of the president, and those who filled streets en masse to defend his democratic legitimacy, even after a military-led massacre killed hundreds of them. RTWT

In her book, El-Ghobashy analyzes protests, elections, and, perhaps most surprising, the courts as mechanisms of political contestation, emphasizing the volatility of collective action and the contingency of alliances, Lisa Anderson wrote for Foreign Affairs. She stresses the uncertainty of those years and insists on examining the “struggle to rearrange power within the state” as it happened.