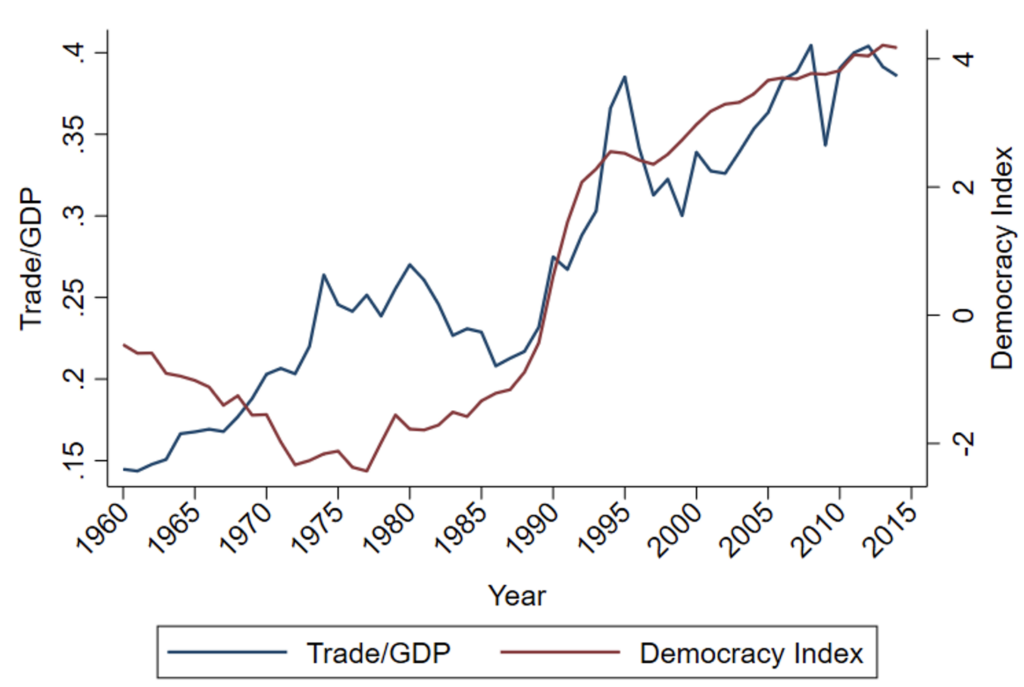 While the ‘top-down’ imposition of political institutions is not desirable and rarely successful, democracy can indeed be ‘exported’ – from more democratic to less democratic countries – through trade interactions, according to analysts Giacomo Magistretti and Marco Tabellini. A large cross-country dataset from 1960 to 2015 shows that economic integration might be advantageous to less democratic countries not only directly by fostering GDP growth, but also indirectly by favoring the transition to democracy and the socioeconomic and political benefits associated with it, they write for Vox, the Policy Portal of the Centre for Economic Policy Research:

A large literature argues that democracy is more likely to prevail once a certain threshold of GDP per capita is reached. Hence, in the presence of gains from trade, and especially from trade with democratic partners, our findings may be driven by economic growth. However, in contrast with this idea, we provide evidence that our results cannot be explained by direct income effects. We also do not find an association between economic integration and human capital accumulation – another factor that might promote democratization.

But it is the transmission of democratic capital, from more democratic to less democratic countries that is more significant, Magistretti and Tabellini contend. Through economic integration, citizens of autocratic regimes might get exposed to the institutions of their partners, updating upwards the perceived benefits of democracy – such as the protection of civil liberties, the respect of human rights, and broad-based political representation.

The findings will make interesting reading for the Center for International Private Enterprise, a core partner of the National Endowment for Democracy (NED), which has long argued that trade ultimately facilitates democratization.