Ukraine is “the single most important front of [the] war against authoritarian expansion,” according to Stanford University’s Francis Fukuyama.

“Clearly it matters a lot to Putin that Ukraine does not succeed as a democracy. He wants to show that all of these color revolutions lead to anarchy, and so he’s perfectly happy to see Ukraine floundering,” he tells The American Interest’s Charles Davidson and Jeffrey Gedmin.

“Ukraine is a major European country and if it ends up going back toward the Russian orbit, or if it doesn’t solve its corruption problems, that’s not going to bode well for democracy in Europe as a whole,” adds Fukuyama, a National Endowment for Democracy board member.

The potential soft power influence of President-elect Volodymyr Zelenskiy’s Ukraine on audiences in Russia and around the post-Soviet area is limitless. But will he will use it once he is in charge? asks Grigory Frolov, vice president of Free Russia Foundation and head of Free Russia House in Kyiv. 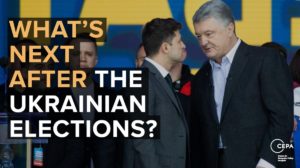 Discussions about how Ukraine can influence Russia, or help Russian dissidents, or create a Russian studies think tank have been circulating in Kyiv for a while, but it never fit with the general line of the party before Zelenskiy. But Ukraine, with its cultural vibe and powerful civil society, is well-placed to compete with Russia he writes for The Atlantic Council:

Ukraine has an attractive and life-affirming public ideology that differs from that of the Kremlin’s, but it does not export it. Ukraine has a capability to influence Russian-speaking communities beyond its borders but it never has. The country has enough infrastructure and resources to compete for talented Russian-speaking migrants from the former Soviet Union (including Russia), but its migration agency hasn’t been reformed since 1991.

As a thriving, independent Ukraine will, like nothing else, guarantee the frustration of Putin’s designs to re-create something resembling the old Soviet space, it’s in everyone’s interest, except that of ex-KGB revanchists, to support Ukraine in its democratic transition, writes George Weigel, the distinguished senior fellow of the Ethics and Public Policy Center, where he holds the William E. Simon Chair in Catholic Studies.

Kyiv Mayor Vitali Klitschko will attend and deliver a speech at this week’s tribute ceremony honoring Senator John McCain at the invitation of the International Republican Institute (IRI), reports suggest. The late senator, who chaired the IRI for 25 years, will be awarded the National Endowment for Democracy ‘s special Democracy Award posthumously.

The German Marshall Fund and the Transatlantic Democracy Working Group host a roundtable discussion on May 7 on Ukraine’s Post-Election Path: The View from Washington and Kyiv, with special guests: