Over 100 Russian servicemen from Buryatia have returned home after refusing to fight Vladimir Putin‘s war in Ukraine, according to an anti-war group, Newsweek reports.

A plane with 150 servicemen who terminated their contracts with Russia’s defense ministry landed in the Russian republic near the Russia-Mongolia border over the weekend, said the founder of the anti-war Free Buryatia Foundation.

Ukraine has vowed not to cede another inch of territory to Russia. At the same time Ukraine appears to be preparing to launch an offensive in the South. Holding the line in the East and pushing back the Russians down south. Is Ukraine now equipped with Western weapons to follow through? DW News asks (above). According to Kyiv, we will soon find out.

The conflict is turning into a test of global stamina between democracy and autocracy, observers suggest.

“Everything the administration has done in terms of providing support has been fantastic,” said Evelyn N. Farkas, the executive director of the McCain Institute for International Leadership and a former Obama administration official. “All I can say is we need more of it faster.”

Biden should not limit his ambitions to keeping the Russians in the east, she told The Times. “We need to help the Ukrainians actually launch an offensive,” she said, “not just hold some ground and keep them away from Kyiv.” 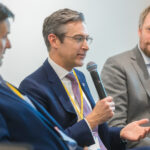 “Many in the West fell into the trap that standing by [Ukraine] would be escalatory, provocative to Russia. That’s exactly the backward way to see it,” says Damon Wilson, President and CEO of the National Endowment for Democracy (NED). “Not supporting frontline democracies is escalatory, not providing significant military assistance to their civil societies is provocative because it demonstrates a lack of clarity, lack of will and helps to demonstrate to Vladimir Putin that maybe you can get away with it.”

“The truth is that Vladimir Putin doesn’t understand the power of the people, and people power in Ukraine and Georgia is what is helping these countries be resilient, democratic and protect their freedom and sovereignty,” he tells LRT’s Andrius Balčiūnas.

History will show that the war in Ukraine is an axial event, says Yale historian Timothy Snyder. It demonstrates that the democratic project is intrinsically about the affirmation of fundamental human values like courage, and that there can be no sustainable European security or political architecture without Ukraine, he told a symposium on The Last Forty Years and the Next Forty: Eastern Europe, Europe, the World, in conversation with Yuval Noah Harari and Ivan Krastev (below). Ukraine has been hidden from history, from being the bread basket of ancient Athens to being at the center of both the Soviet and Nazi projects to transform the world.

Putin’s use of genocide as a justification for occupying a neighboring country relates to his obsession with the West’s justifications for interventions elsewhere, Estonian analyst Shpend Kursani suggests.

In an interview for Der Spiegel a few weeks after Russia invaded Ukraine, Ivan Krastev (right, with NED board member Marc Plattner) noted that “Putin lives in historic analogies and metaphors.”9 In highlighting Putin’s obsession with most of the West’s support for Kosovo’s independence, Krastev also observed that “the attack on Kyiv began with the destruction of the television tower just as NATO attacked the television tower in Belgrade in 1999” – pointing out Putin’s cynical view of Western interventions elsewhere.

Israel’s Defense Minister Benny Gantz has approved an aid package of helmets, protective vests and more, maintaining a policy of not supplying Kyiv with offensive weapons, The Times of Israel reports. Israel is one of the few countries that maintains relatively warm relations with both Ukraine, a fellow Western democracy, and Russia, in part due to Syrian security concerns. 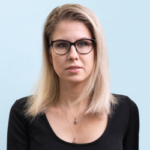 “The war unleashed by Putin is criminal not only in relation to Ukraine and Ukrainians, but also to Russia,” says Lyubov Sobol (right), a lawyer and political activist with the Anti-Corruption Foundation of Russia (FKB).

“It contradicts Russia’s national interests and literally destroys its future. Putin and his regime are a common enemy for Russians, Ukrainians, and the entire democratic world,” adds Sobol, currently at Stanford a visiting scholar with Stanford’s Center on Democracy, Development, and the Rule of Law (CDDRL).

As a close associate of Alexei Navalny, Sobol and the FKB push for the democratization of Russia and advocate against Putin’s policies through on-the-ground and digital outreach, writes FSI’s Melissa Morgan.

Chechens are also fighting on behalf of Ukraine and against their countrymen, known as Kadyrovites, aligned with the Kremlin, The Washington Post reports. 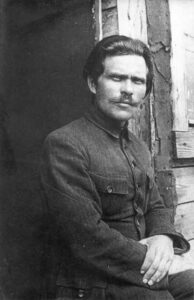 “There are very few of us — my people have been evicted and exterminated,” said the commander, who asked to be identified only by his call sign, Makhno [a celebrated anti-Bolshevik Ukrainian anarchist military leader]. He leads a reconnaissance platoon that is part of Ukraine’s military intelligence service.

“The Russians are destroying our population,” he said. “How can we not fight them?”

Ukrainian intellectuals, socialists and even anarchists have chided the North American left for its lack of a coherent solidarity with Ukrainians, notes Christopher Powell, an Associate Professor at Toronto Metropolitan University.

The reason for this floundering is simple: supporting military aid to Ukraine involves siding with U.S. imperialism, but opposing military aid means condoning Russian imperialism and probable genocide in Ukraine, he writes for The Conversation.

The former President of Poland Lech Walesa has called for either a change to Russia’s political system, or for its “dismemberment” to reduce the population to 50 million. The several dozen peoples incorporated into Russia during the historical process should rise up against the Kremlin, he said.

Meanwhile, pro-Kremlin hacktivists are causing mayhem way beyond Ukraine, according to experts.

While security experts have frequently warned that attacks from Russia could target Western countries, the efforts of volunteer hacktivist groups can have an impact without being officially backed or conducted by the state, Ars Technica reports. “They definitely have malicious intent when they conduct these attacks,” says Ivan Righi, a senior cyberthreat intelligence analyst at security firm Digital Shadows who has studied Killnet. “They’re not working together with Russia but in support of Russia.” 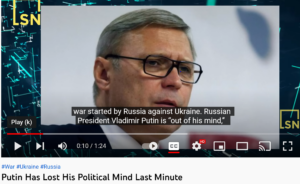 Russian opposition politician Mikhail Kasyanov (right), Putin’s first prime minister, has warned that the outcome of the war Moscow launched against Ukraine will determine Russia’s future, and if Ukraine falls, “the Baltic states will be next,” RFE/RL reports.

Kasyanov, now an outspoken critic of the president, told the French news agency AFP that at first he didn’t believe Putin would actually unleash a full-scale war against Ukraine. But when he saw a meeting of Russia’s Security Council called just three days before the invasion was launched on February 24, “I realized, yes, there will be a war.”

“I just know these people and by looking at them I saw that Putin is already out of it. Not in a medical sense but in political terms,” he said, adding he “knew a different Putin.” Kasyanov, 64, said he was confident Putin would eventually be replaced by a “quasi-successor” controlled by Russia’s powerful security services but that eventually Russia could return to democracy, albeit with difficulty.

“I am certain that Russia will return to the path of building a democratic state,” Kasyanov, who was prime minister between 2000-2004, told AFP.

“Corruption is a foundational element of the system Vladimir Putin and his cronies built,” Sobol adds. “Without removing him and his supporters from power, it will not be possible for serious reforms or the democratization of state mechanisms to take place.”

Within the war between Russia and Ukraine, a war between Chechens https://t.co/JG4LBX58Br