The United States is re-entering an era of great power competition, in which China and Russia “want to shape a world antithetical to U.S. values and interests,” according to the National Security Strategy issued by the White House in December 2017.

While there has been bipartisan consensus in Washington on a tougher approach to Beijing’s sharp power, critics see strategic ambiguity, The New York Times reports.

“The economic and security and technological and even scientific components of the U.S.-China relationship are now being conflated,” said Jessica Chen Weiss, a professor of government at Cornell University who studies Chinese politics and nationalism. “What’s worrying to many is not being able to decipher different levels of risk and how far and how quickly the efforts to indiscriminately decouple the United States and China will go.”

The U.S. is ill-equipped to counter the increasingly brazen political warfare that autocratic regimes are waging to undermine democracies, according to Pentagon and independent strategists writing in a white paper shared with POLITICO. 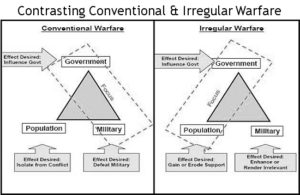 The U.S. is underestimating the scope of Russia’s aggression, which includes the use of propaganda and disinformation to sway public opinion across Europe, Central Asia, Africa and Latin America. The study also highlights the dangers of a growing alignment between Russia and China, which share a hostility towards the West’s international alliances and an affinity for “authoritarian stability.”

The authoritarian offensive is taking advantage of a malaise afflicting the West’s liberal democracies.

Reviving the democratic center requires a new and unifying civic patriotism – a central idea of The Prague Appeal for Democratic Renewal – which asserts that civic nationalism is not just compatible with liberal democracy but a necessary component of it, Gershman added. RTWT