The Taliban’s centralization of power is alienating those who were key to the movement’s success — similar to how President Ghani’s exclusionary politics alienated the republic’s natural allies, argues Sayed Madadi, a Reagan-Fascell Democracy Fellow at the National Endowment for Democracy’s International Forum for Democratic Studies.

The Taliban have long prioritized their cohesion over any other political objective. Now, unable to govern and unwilling to share power with other political forces, the centralized regime’s disintegration becomes increasingly inevitable — and arguably has been expedited — as it fails to incorporate even its own senior political and military leadership into decision-making processes, he writes for the Middle East Institute’s Afghanistan and Pakistan Studies Program.

The Taliban don’t have the field to themselves, adds analyst Amin Saikal. They are neither prone to change nor united among themselves to embrace an enlightened Islam.

It is imperative that the West support the anti-Talban resistance until they can negotiate for a nationally and internationally legitimate and participatory system of governance and a sovereign united Afghanistan with respect for human rights and the rights of women. Whatever the circumstances, the struggle for the soul of Afghanistan is set to continue, he writes for The Strategist.

Under Secretary of State Uzra Zeya this week delivered remarks at a NED event honoring Afghan partners to the United States, in Virginia. The occasion was about celebrating our courageous partners, building community, and standing in solidarity with their family, friends and colleagues who remain in Afghanistan, said NED President and CEO Damon Wilson.

NED’s commitment is not only to its partners forced into exile, he told Baztab (above), but to maintain support for and solidarity with Afghan democrats and civil society struggling for women’s rights, independent media, civic space and human rights. 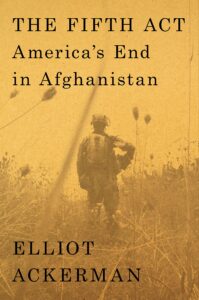 Join American Purpose on September 13, 2022 as Elliot Ackerman discusses his new book, The Fifth Act: America’s End in Afghanistan. Elliot Ackerman is the author of several novels as well as the memoir Places and Names: On War, Revolution and Returning (2019). His books have been nominated for the National Book Award, the Andrew Carnegie Medal in both fiction and non-fiction, and the Dayton Literary Peace Prize among others. He is both a former White House Fellow and Marine, and served five tours of duty in Iraq and Afghanistan, where he received the Silver Star, the Bronze Star for Valor, and the Purple Heart.September 13, 2022 at 12:00 p.m. ET Register here

Over 100 of our Afghan partners who have resettled in the United States join us for a #NEDWelcome in DC.

Today is about celebrating our courageous partners, building community, and standing in solidarity with their family, friends and colleagues who remain in Afghanistan. pic.twitter.com/jSp0zauqt7