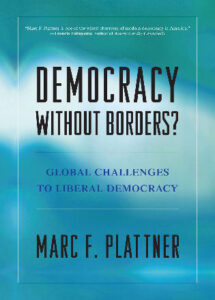 Today’s authoritarians are increasing their mutual collaboration in new organizations and through long-established intergovernmental agencies, a trend sketched out in the Journal of Democracy, notes Marc F. Plattner, a distinguished nonresident fellow at the National Endowment for Democracy’s International Forum for Democratic Studies and author of Democracy Without Borders? Global Challenges to Liberal Democracy (2008).

But a coordinated response from democratic states raises the question, Who Belongs in the Club of Democracies? and suggests that the foreign policy of the liberal democracies needs to proceed both at the level of geopolitics and the level of ideas in confronting the authoritarian challenge, he writes for American Purpose:

For the most part, the defense of our security interests and the defense of democracy complement each other. But there are sometimes serious tensions between them. ….Dealing with the issue can require unpleasant compromises. Nearly everyone accepts that when the survival of democracy itself is ultimately at stake, it may be necessary to swallow our revulsion at partnering with abhorrent regimes.

American foreign policy is not always pro-democratic, however, according to Stanford University’s Larry Diamond. Policymakers are continually considering what constitutes the United States’ international interests, and in some cases they prioritize good relations with autocratic actors. That said, strong U.S. leadership is necessary—though not sufficient—for the health of global democracy, he writes for Foreign Affairs.

But in an era of global uncertainty, the task for U.S. policymakers is to rediscover the principles and practice of statecraft: to marshal national power and collective action against the tendency toward disorder, argues Richard Haass, President of the Council on Foreign Relations and the author of the forthcoming The Bill of Obligations: The Ten Habits of Good Citizens. Washington should prioritize establishing order over fostering democracy abroad—at the same time as it works to shore up democracy at home, he contends: 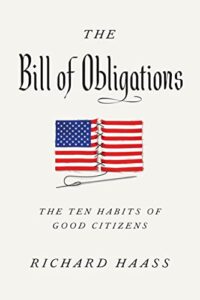 This shift would translate into a foreign policy that is based largely on alliances to deter Russian and Chinese aggression and selective partnerships of the like-minded to address global challenges that the United States cannot ignore or handle on its own. In addition, democracy promotion at home rather than abroad should be the focus of U.S. attention, since there is more to build on and more to lose if the effort fails.

Framing the crisis in Ukraine as one of democracy versus authoritarianism has, not surprisingly, fallen flat among many illiberal leaders, Haass writes for Foreign Affairs. The same logic applies to the U.S. relationship with Saudi Arabia, which the Biden administration is belatedly working to repair: a preference for democracy and human rights is one thing, but a foreign policy based on such a preference in a world defined by geopolitics and global challenges is unwise and unsustainable.

Confronting the authoritarian challenge will demand from the liberal democracies firmness and resolve, Plattner suggests. It will also require nimble diplomacy, and an intelligent assessment of the inevitable tradeoffs that defending democracy entails. RTWT