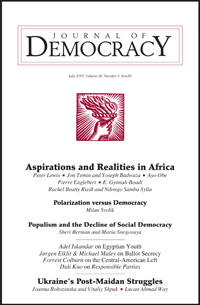 Three decades after sub-Saharan Africa joined the “third wave,” democracy’s ability to endure has been established in many countries, but its quality remains a grave concern, notes Peter M. Lewis, Associate Professor of African Studies at the Johns Hopkins University School of Advanced International Studies (SAIS).

Since democratic pressures in Africa challenged autocracy at the end of the Cold War, there has been vigorous debate over the resilience of democracy and the quality of democratic performance, he adds, highlighting five important observations raised in a cluster of six articles in the July 2019 issue of the Journal of Democracy:

At present, the countries of sub-Saharan Africa confront the same kinds of contradictory pressures that are seen in other regions of the world, with signs of populism appearing in South Africa, Tanzania, and Zambia, Lewis notes. Leaders across a wide range of countries from Benin to Malawi are displaying impulses toward illiberalism. Yet any talk of democratic “backsliding” or “recession” must be qualified by a due regard for the evidence of democratic resilience and even progress across the region. RTWT