Democracies must shift from a defensive posture in the face of autocratic resurgence and democratic decline, and seize the opportunity to reverse these trends at a potential “inflection point remembered years from now,” USAID Administrator Samantha Power said today.

As Madeleine Albright predicted, “Democracy is poised for a comeback.” Together, we have to seize this moment to make it happen, Power told Freedom House (above), paying tribute to the group’s “peerless” research and advocacy, including last week’s report on transnational repression.

Forty years ago, President Ronald Reagan’s Westminster address stressed the necessity of establishing the infrastructure for democracy – from labor unions to independent media – that led to democracy assistance as we now know it, helping nascent democracies develop sustainable institutions, she observed.

But just as as illiberal forces have developed new tools and technologies of repression, democracy advocates also need new tools to supplement traditional approaches, she added, announcing initiatives to cement progress in democratic bright spots that help reformers deliver, counter digital authoritarianism, and “shine a light” on oligarchs who hide their ill-gotten gains. 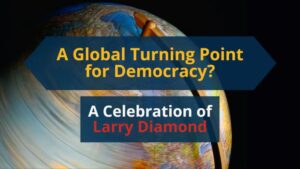 “We have a massive opportunity before us right now. The evidence that proves autocracies are weaker and less capable than democracies is playing out right before our eyes,” with Vladimir Putin’s violent reaction to Ukraine’s aspirations for freedom betraying the inherent fragility of authoritarian rule, she said.

“The world’s democracies, allies in the private sector, civil society, multilateral institutions, religious and diaspora communities, everyday citizens, all of us… must build on the unity we’ve demonstrated in Ukraine to try to extend a broader revolution of dignity to people seeking to be free,” said Power. Building on the Presidential Initiative for Democratic Renewal to extend the global revolution for dignity, she announced…

The world’s free nations, multilateral institutions, private sector partners, and civil society can demonstrate that democracies can deliver in a way that autocracies never can, Power said. Democracies can build on the newfound unity on Ukraine to build a broader campaign for dignity.

Today I’m announcing the creation of a new dekleptification guide—a handbook to help countries make the difficult transition from kleptocracy to democracy.