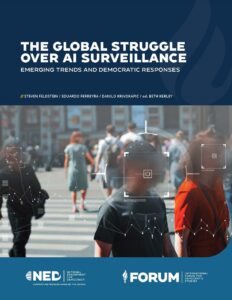 Just as with doctors’ medical practice, purveyors of new technologies should commit to a ‘do no harm’ code of ethics, USAID Administrator Samantha Power said in a keynote speech today.

It might at least assuage some of the growing anxiety over the implications of artificial intelligence discussed in The Global Struggle Over AI Surveillance: Emerging Trends and Democratic Responses, a new report from the International Forum for Democratic Studies.

“From cameras that identify the faces of passersby to algorithms that keep tabs on public sentiment online, artificial intelligence (AI)-powered tools are opening new frontiers in state surveillance around the world,” states the report, edited by the Forum’s Beth Kerley, which addresses both the democracy implications of new technologies and vectors for civil society involvement in their design, deployment, and operation: 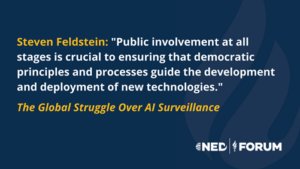 Through this combination of strategies, democracies can prepare themselves to promulgate standards globally that will embed AI in human rights and rule of law safeguards, keep abuses in check, and counter authoritarian ambitions to set the rules of the game, Feldstein concludes.

When Serbia’s interior minister and police director announced plans to install 1,000 high-tech cameras from People’s Republic of China (PRC) tech giant Huawei, their statement crystalized worries that had been growing among members of our team since we first heard about vague proposals to “upgrade” traffic cameras in the city, adds Danilo Krivokapić of Serbia’s SHARE Foundation. Over the following two years, SHARE Foundation reframed the discussion around this project in an effort that mobilized tech enthusiasts, local residents, media outlets, and the broader European digital rights community. In mid-2021,

We discovered that the Interior Ministry had opened a little noticed “public” debate on a proposed new police law, which was just about to close. The proposal would have introduced legal grounds for mass biometric surveillance. Upon learning of this effort, we were able to obtain reactions from members of the EU Parliament as well as global and regional human rights organizations. Local media coverage was extensive. In two days, the disputed proposal was pulled back.

While the digital transformation of public security is an unavoidable part of the future, Krivokapić writes, it is up to citizens, human rights defenders, and the power of civic engagement to make sure that digitalization does not lead to dystopia. RTWT