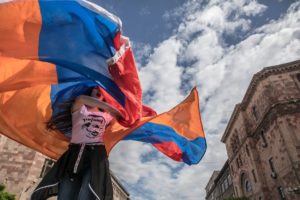 Converting Armenia ’s ‘Velvet Revolution’ into a sustainable democratic transition requires establishing an  “’institutional backbone” to ensure there is no reversion to corrupt, autocratic governance, says Daron Acemoglu, a Turkish born Armenian economist. While he is willing to advise and assist with the transition, broader public engagement is more important, said the co-author of Why Nations Fail, a compelling argument for how and why democracy aids economic growth.

“Unless you understand the details of the conflicts within the society, unless you understand how the corruption, media manipulating, exploitation, vote buying, patronage work, an outsider like me cannot come up with the right compromises and the right strategies and the right tactic [for] dealing with the process of institutional change,” Acemoglu told Armenian Public Radio. “At the end of the day it is, it is the Armenian people that need to step up, not the Prime Minister, not the MPs, not the bureaucrats and judges, certainly not me and not the Diaspora, It’s the Armenian people, the youth, people that have been silent and sidelined for so long, they are getting involved in politics,” he added.

“Armenia’s Future: Democratic Breakthrough or Political Instability?” is the subject of a public discussion on Tuesday, May 22 from 4:30 to 5:30 pm on the implications of Armenia’s evolving political developments for the country’s democratic trajectory and other countries in the region.  Co-organized by the Georgetown’s Institute for the Study of Diplomacy, the USC Institute for Armenian Studies, and the Foreign Policy Program at Brookings, the event will take place at Georgetown University’s Mortara Center (3600 N Street NW). RSVP

The discussion will feature remarks from Salpi Ghazarian, Director of the USC Institute of Armenian Studies, and CiviliNet.TV; Vartan Oskanian, former Foreign Minister and Parliamentarian of Armenia and Founder of Civilitas Foundation; and Anna Ohanian, Chairman of the Department of Political Science at Stonehill College.  The discussion will be moderated by Miriam Lanskoy, Senior Director for Russia and Eurasia at the National Endowment for Democracy. 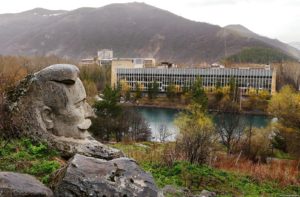 A decaying sports and cultural center (right)  hidden in a forest in the spa town of Jermuk offers a fascinating insight into Armenia’s Soviet period, RFE/RL adds.

“There is no blueprint for any country to follow,” but Armenia is at a “turning point,” said Acemoglu (left), noting that change has two legs.

“The first leg is that you need to have a peaceful political transition, meaning that you actually require that there is a beginning of a process of political change and that it does not spin out of control, turning into a huge civil war, a mortal combat between different factions. Armenia miraculously managed that,” he said. “We are in the midst of a process of political change, at least temporarily the old guards are out, new faces, new blood, new perspective are here, and more importantly there is a broad enthusiasm in the society, civil society, government, business.” Acemoglu noted.

But the second leg of the process entails creating a system, a level playing field, with incentives and opportunities for people to participate. “We know that this requires us to get rid of the corrupt elite, it requires us to bring new institutional elements so that the new system doesn’t turn into one in which other individuals, other groups become the beneficiaries of corruption,” he added. RTWT