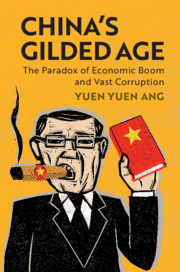 Unlike the old superpower contest between the United States and the Soviet Union, the incipient cold war between China and the US does not reflect a fundamental conflict of unalterably opposed ideologies. Instead, today’s Sino-American rivalry is popularly portrayed as an epic battle between autocracy and democracy, argues Yuen Yuen Ang, Professor of Political Science at the University of Michigan, Ann Arbor, and the author of How China Escaped the Poverty Trap and China’s Gilded Age.

Moreover, the facts seem to suggest that autocracy has won while democracy has fallen flat on its face. But such a conclusion is simplistic and even dangerously misleading, for three reasons, she writes for Project Syndicate:

“So, in other words, if you’re using the Chinese technology, your data is not just in those private companies’ hands, such as Google or Apple. Your data is, essentially, in the hands of the Chinese Communist Party,” says Xiao Qiang, founder of National Endowment for Democracy partner China Digital Times, who also heads the University of California at Berkeley’s School of Information’s Counter-Power Lab, an interdisciplinary research group that focuses on digital rights and internet freedom. That’s a risk, he tells PRI’s The World, for those signing on to China’s digital Silk Road —whether having China install a 5G network or a “smart city” surveillance camera system. It’s even a risk at the personal level, he says, for users of Chinese apps like TikTok and WeChat.

“The form of generalized surveillance and political repression that most concerns me is the pervasive surveillance of WeChat, which is the chat and everything else app that pretty much all Chinese people who use smartphones are going to be using,” says Graham Webster, a research scholar who edits the DigiChina project at Stanford University’s Cyber Policy Center.

The False Dichotomy of Autocracy and Democracy by Yuen Yuen Ang @ProSyn https://t.co/5qIudn1I8Q