The US election is the most important since 1932, when Franklin Delano Roosevelt became president in the depths of the Depression. With much trial and error, FDR saved democracy, at home and abroad, says FT columnist Martin Wolf:

Just a few days after his commitment to make the US democracy’s “arsenal”, FDR made a still more remarkable promise to posterity. In his State of the Union address of 6 January 1941, he committed the US to promoting four freedoms: freedom of speech; freedom of worship; freedom from want; and freedom from fear. These were not idle vows. Over the ensuing half century, the world experienced a great spread of democracy and reduction in poverty. Neither would have happened without the institutions the US created, the habit of co-operation it promoted and the prosperity it spread.

“This election is so important, because the US plays a unique role in the world,” Wolf adds. “It has long been the paramount model of a functioning liberal democracy, leader of the countries that share these values and an essential player in resolving any big global challenge.”

When either Joseph Biden or Donald Trump takes the oath of office on January 20 of next year, he will confront a world sliding steadily toward authoritarianism, says a leading analyst.

“As I document extensively in a recent analysis, last year was the first year since the dawn of the post-Cold War era when the majority of states with populations over one million were not democracies,” notes Larry Diamond, a senior fellow at Stanford University’s Hoover Institution and coordinator of the democracy program of the Center on Democracy, Development, and the Rule of Law (CDDRL). “It’s not that people don’t any longer aspire for freedom. There have been some twenty mass movements or political openings for freedom and democracy since the Green Movement in Iran in 2009. But only two of these (in Tunisia and Ukraine) have been successful.”

“Reversing the global democratic recession will require a bipartisan, multilateral, and multi-pronged commitment to supporting democrats, pressuring autocrats, fighting kleptocracy, countering malign authoritarian (especially Chinese and Russian) sharp power projection, promoting democratic values and ideas, and reforming and strengthening our own democracy, adds Diamond. And all of this must be done while working to contain the most severe challenge of policy performance that democracies have faced since World War II: the COVID-19 pandemic,” he writes for American Purpose: 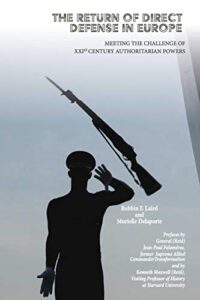 A new book addresses the need to meet the challenge of 21st century authoritarian powers, notes one observer, “because the great risks that lie in front of our democracies deserve to be named: national selfishness, divergence of strategic and economic interests, trampling on fundamental and commonly agreed values.”

The Cold War is over, but the danger from Russia has returned, according to Robbin Laird and Murielle Delaporte, the authors of The Return of Direct Defense in Europe: Meeting the 21st Century Authoritarian Challenge. The West’s democracies face the challenge of building a 21st-century defense infrastructure and rebuilding NATO forces to confront Russia and other authoritarian states and movements.

The Russians with their approach to hybrid warfare and the Chinese with their evolving operational approaches in the “gray zone” are crafting innovative approaches to enhance their objectives short of significant engagements with peer competitors, they observe. They are working to push the “red line” further down the spectrum of conflict and shaping a wider range of operational space within which their forces and capabilities can achieve desire objectives.

Autocracies are increasingly challenging the rules and norms that have, for decades, regulated international exchange, according to a recent report. As competition intensifies, it will fall on democratic nations to uphold the central tenets of the rules-based international system, including democracy, human rights, and free trade, notes A brave new Britain? The future of the UK’s international policy, a report from the UK House of Commons Foreign Affairs Committee.

The next president will face the most formidable challenges to freedom since the end of the Cold War. We need rapid change in our moral stance. But more than that, we need a bold strategy for a prolonged campaign to defend, renew, and advance democracy. https://t.co/KA3qIanTSr