Can Japan help defend and revive the “liberal order” – the system of guiding principles that governed conduct among western democracies after World War II – asks Paul Nadeau, an adjunct fellow with the Scholl Chair in International Business at the Center for Strategic and International Studies (CSIS).

To its supporters, its demise is generally regarded as an impending disaster for global stability, and most expect that if it disappears it will be replaced by neo-authoritarian governments practicing might-makes-right power politics. Its critics, meanwhile, describe it as neither liberal nor international or even as a myth, he writes for the Tokyo Review.

Politically, Japan has not experienced the populist waves that have vexed western democracies, social unrest is almost unheard of, and the fact that it is a nonwestern liberal democracy helps to head off arguments that the liberal international order is a surrogate for Western primacy, Nadeau observes, reflecting on the Japan Institute of International Affairs’ first Tokyo Global Dialogue, held on December 2-3, 2019: 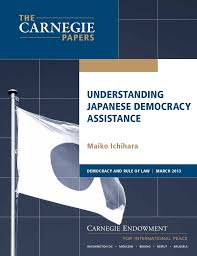 The implications of Japan’s reorientation toward a “values-based” foreign policy for rule of law and democratic development in Asia were considered at a recent National Endowment for Democracy (NED) forum (above).

The essential problem is that there is little domestic incentive for political parties to prioritize liberal internationalism as part of their policy programs, Nadeau suggests. While voters in western democracies were divided over economics until the 1980s, left and right parties have mostly converged on most economic questions and instead rely on identity and social issues to distinguish themselves. RTWT