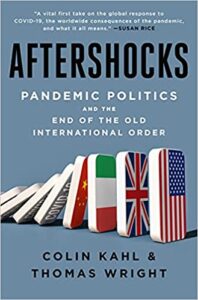 Two separate constellations of powers are steadily emerging, one largely democratic and led by the United States and the other authoritarian and led by China, Brookings analyst Thomas Wright, Director of the Brookings Institution’s Center on the United States and Europe and a co-author, with Colin Kahl, of Aftershocks: Pandemic Politics and the End of the Old International Order. These constellations are interdependent but riven by distrust and rivalry, he writes for Foreign Affairs:

The United States and China are also engaged in what Jake Sullivan, Biden’s national security adviser, recently called “a competition of models.” China is seeking to make the world safe for the CCP and to demonstrate the effectiveness of its system. This entails pushing back against what it sees as pressure from liberal democratic countries that could thwart its objectives. For its part, the United States worries about the negative externalities of Chinese authoritarianism, such as censorship of international criticism of Beijing or the export of its tools of repression to other countries.

Cooperation across this [authoritarian/democratic] divide should always be the first choice in times of shared crisis, but as the COVID-19 pandemic has demonstrated, the U.S.-led constellation must always have a backup plan. It did not have one in 2020. It needs one for the next crisis, Wright concludes. RTWT