As China tames the coronavirus epidemic now ravaging other countries, its success is giving rise to an increasingly strident blend of patriotism, nationalism and xenophobia, at a pitch many say has not been seen in decades, the New York Times reports:

Some of the uglier manifestations of nationalism have been fueled by government propaganda, which has touted China’s response to the virus as evidence of the ruling Communist Party’s superiority. And recriminations from abroad, including calls to make China pay for the pandemic that began there, have triggered defensiveness on the part of many Chinese……They recently targeted a novelist, Fang Fang, who for two months published a daily journal of life under lockdown in Wuhan, where the outbreak began. She wrote of the bravery of ordinary people around her, while also vowing to hold local government officials to account.

Despots use fear and coercion to keep foreign ideas at bay. Smart regimes know that nationalism is a more subtle tool. Bring a society to the right pitch of rage against foreign rivals, and people will scorn outside influences of their own accord. Something like that is happening in China, four months into the outbreak of covid-19, the Economist reports:

When news broke that Fang Fang’s “Quarantine Diaries” would be translated and published in America and Germany this summer. Back home, the shift in opinion was brutal. The social-media hashtag “Fang Fang’s Diaries” has received 550m views and 194,000 comments. Recent posts are overwhelmingly hostile. Netizens have been challenging her moral authority, lobbing the revealing insult “Ni bu pei!”, or “You are not qualified!” Though Fang Fang has pledged to give away her book royalties, she is charged with seeking fame at the expense of the dead—eating “buns made with human blood.”

The global pandemic forces us all to confront an inconvenient truth: by politicizing all aspects of life including people’s health, continued autocratic one-party rule in the People’s Republic of China has endangered the entire world, according to an open letter to Chinese citizens and friends of China at home and abroad.

Rather than trusting the CCP’s intentions and accepting establishment academics’ uncritical approval of the party-state’s policies, we should pay greater attention to the voices of what can be termed ‘unofficial’ China, says the letter, signed by parliamentarians, academics, advocates and policy leaders. These independent-minded academics, doctors, entrepreneurs, citizen journalists, public interest lawyers and young students no longer accept the CCP’s rule by fear. Neither should you, they write in the letter, The Communist Party’s rule by fear endangers Chinese citizens—and the world.

As an international group of public figures, security policy analysts and China watchers we stand in solidarity with courageous and conscientious Chinese citizens including Xu Zhangrun, Ai Fen, Li Wenliang, Ren Zhiqiang, Chen Qiushi, Fang Bin, Li Zehua, Xu Zhiyong, and Zhang Wenbin, just to name a few of the real heroes and martyrs who risk their life and liberty for a free and open China, they add. 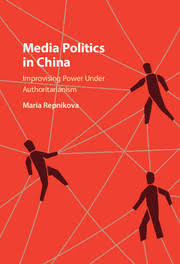 China’s propaganda has matured — but so have its targets, argues Maria Repnikova (@MariaRepnikova),  an assistant professor of global communication at Georgia State University and the author of “Media Politics in China: Improvising Power Under Authoritarianism.”

Instead of delivering diktat and defensiveness, the government now engages in selective dialogue with its audiences and their criticisms, featuring those views in its own storytelling, or its retelling of them. So far, this seems to have played to the Communist Party’s advantage, partly by forcing it to keep adapting its messaging. But the public, in China and abroad, in turn is reinterpreting the propaganda, and further testing the party’s agility, she writes for the Times.

When it comes to China’s sharp power offensive, Senator Ben Sasse has been forthright and consistent, Commentary’s Christine Rosen writes.  “The claim that the United States has more coronavirus deaths than China is false,” he wrote. He warned people not to take “Beijing’s garbage propaganda” seriously.

This is neither a partisan nor a strictly American approach, Rosen adds. China’s official virus count is so obviously skewed that in the UK, the House of Commons’ Foreign Affairs Select Committee issued a report in early April noting that “from the outset China has sought to obfuscate the data.

”Professor Xu Zhangrun —now under house arrest (and featured in the latest Journal of Democracy) —has called on his compatriots to stop their uncritical support for the Chinese Communist Party (CCP), and instead to “rage against this injustice; let your lives burn with a flame of decency; break through the stultifying darkness and welcome the dawn,” add the open letter signatories (below, including many partners of the National Endowment for Democracy – NED).