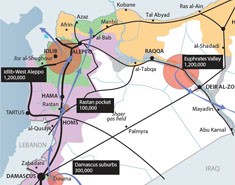 Nearly seven years of war are often blamed for hardening local ethnic and religious hostilities in Syria, but sectarianism is nothing new in that scarred land — its cornerstones were set in place by an inherited Ottoman system and later exploited by Hafiz and Bashar al-Assad, The Washington Institute for Near East Policy reports:

A new study from The Washington Institute offers a comprehensive look at that decades-long process, using scores of original maps to assess how the war’s combatants have cracked these fissures wide open since 2011. To discuss the study’s conclusions and the country’s political and demographic trajectory, the Institute is pleased to host a Policy Forum with the author, Fabrice Balanche, who recently returned from a visit to a key hotspot, the Syria-Turkey border. The event will be moderated by Institute senior fellow Andrew Tabler.